Big banks have gotten two new bills passed in the House of Representatives that roll back regulations that were put in place after the last financial meltdown to keep it from happening again. Yes, that’s right. After the banks nearly destroyed our economy in 2008 (forcing us taxpayers to bail them out to the tune of close to $100 billion) Congress passed Dodd-Frank, which even in its watered-down state on passing was a good step toward reining in some of the most dangerous forms of risk taking on Wall Street. Well, the Republican controlled House (with some help from Democrats too) is doing everything it can to get rid of Dodd-Frank. Why wouldn’t they? They need the money for their campaigns, and Wall Street is only too willing to oblige since keeping down regulations is what lets them take insane risks in the first place and make tons of money. And as long as we keep bailing them out when the risks go sour, there is no incentive for them to be responsible.

Here’s a great rant about it:

What he doesn’t mention is that this bill has passed only the House. The only things keeping it from becoming law is opposition in the Democratically controlled Senate (and even that opposition is not particularly strong, since Democrats depend on campaign contributions from Wall Street too), and from Obama’s veto power (ditto). 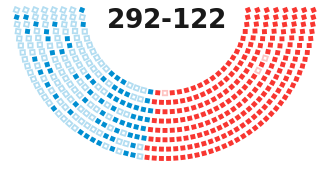 Yes, as I am going to great pains to point out, this is definitely a “lesser of two evils” scenario. We absolutely need to reduce the influence of money in politics, and especially to reverse the Citizens United decision. But until we do, the Democrats are the only thing keeping us from heading down the same road to financial melt-down and government bailouts that has repeatedly happened since we deregulated the banks. The diagram to the right shows out the House voted. Republicans are shown in red, Democrats in blue. The position in the diagram is based on an assessment of their ideology. Note that all but three Republicans voted for the bill, and it was mainly conservative Democrats who joined them.

Here’s a website that lets you find out how your representative voted.

This was written by Iron Knee. Posted on Saturday, December 7, 2013, at 12:54 am. Filed under Irony. Bookmark the permalink. Follow comments here with the RSS feed. Both comments and trackbacks are currently closed.