Satirist Andy Borowitz hits the nail on the head. Even Cliven Bundy’s staunchest supporter, Sean Hannity, has been forced to distance himself from Bundy’s remarks about black people picking cotton and speculating that they were better off as slaves.

WASHINGTON (The Borowitz Report) — Republican politicians blasted the Nevada rancher Cliven Bundy on Thursday for making flagrantly racist remarks instead of employing the subtler racial code words the G.O.P. has been using for decades.

“We Republicans have worked long and hard to develop insidious racial code words like ‘entitlement society’ and ‘personal responsibility,’ ” said Sen. Rand Paul (R-Kentucky). “There is no excuse for offensive racist comments like the ones Cliven Bundy made when there are so many subtler ways of making the exact same point.”

Fox News also blasted the rancher, saying in a statement, “Cliven Bundy’s outrageous racist remarks undermine decades of progress in our effort to come up with cleverer ways of saying the same thing.” 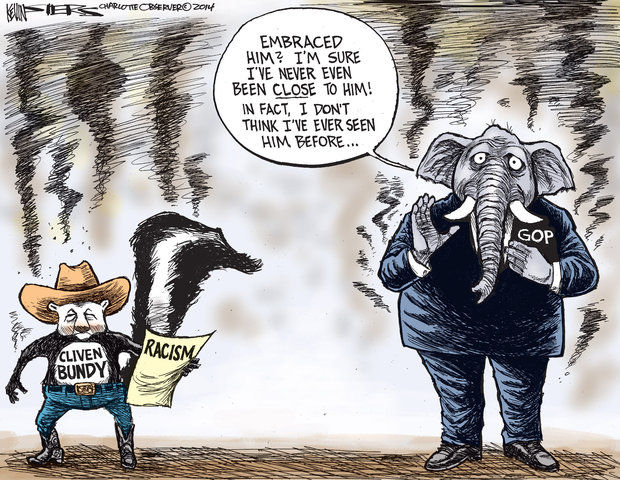 This was written by Iron Knee. Posted on Saturday, April 26, 2014, at 12:25 am. Filed under Humor. Tagged Racism. Bookmark the permalink. Follow comments here with the RSS feed. Both comments and trackbacks are currently closed.