You may have seen terms like “mesh network” and “power grid” but not paid much attention (or even knew their significance), but the ideas behind these terms are becoming very important in many diverse ways.

Whenever you connect things together, there are generally two ways to do it: in a centralized way, or in a distributed (decentralized) way: 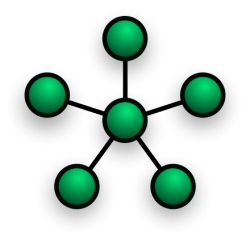 In a centralized network, everything has to go through one or more central nodes, like in the illustration to the left.

For example, an airline might use a “hub and spoke” model for its flights, so in order to fly from one city to another you would typically fly to a central “hub” airport, and then take a second flight to your destination. Likewise, most people access the Internet through a centralized Internet Service Provider (ISP), so in order to send an email to someone in the house next to yours (or even to someone in the same house) the email travels to a central location (which might be hundreds or thousands of miles away) and then back to its destination. Another example is our power distribution system, where large centralized power plants distribute power to individual customers. 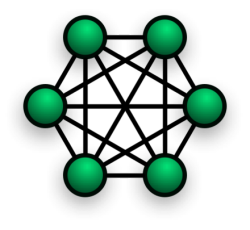 For example, some airlines avoid using hub airports, and instead try to have as many direct flights as is economically feasible. In a distributed power distribution system, instead of large centralized power plants you would have many smaller power generators, like solar panels on individual homes, or windmills. Distributed computer networks are commonly used inside of companies or buildings, so that individual computers can connect directly to other nearby computers without going through a centralized network router (and without leaving the building).

Indeed, the US State Department is worried enough about the insecurity of the Internet that it is spending millions of dollars helping people in other countries set up mesh networks, so that dissidents can communicate with each other without their government finding out. They provided $2.8 million to help set up a mesh network in Tunisia, and have pledged $4.3 million to set up another such network in Cuba. They are also helping set up similar networks in Asia and other places.

According to a former State Department official: “Exactly at the time that the N.S.A. was developing the technology that Snowden has disclosed, the State Department was funding some of the most powerful digital tools to protect freedom of expression around the world. It is in my mind one of the great, unreported ironies of the first Obama administration.”

Even more ironic are political attack ads, funded by the Koch brothers, anti-tax activist Grover Norquist, and big power companies. These ad campaigns in Kansas, North Carolina, Arizona and other states attack solar energy, in particular the policy found in dozens of states that guarantees homeowners and businesses with solar panels on their roofs the right to sell energy back into the power grid. In effect, this starts to convert our national power grid from a centralized network (large power stations sending power to individual consumers) into a mesh network.

A mesh network for power saves money, because power generation can be closer to power consumers (power doesn’t have to be transported as far, so there are fewer losses) and is more reliable. Solar power is especially good, since it generates more power when it is most needed — during hot sunny days when air conditioning is most used. Studies (especially those not funded by power companies) have shown that distributed solar generation like this actually saves power companies money.

But the power companies want to charge individuals for access to their power grid, as much as $100/month. This would destroy solar power.

You would think that self-proclaimed staunch libertarians like the Koch brothers would be all in favor of mesh networks, which favor individualism and individual control over collectivism and large centralized control. But instead they are spending lots of money trying to kill it. Maybe we should start calling them LINOs (Libertarians In Name Only), but a simpler term would just be “hypocrites”.

UPDATE: NY Times has an editorial about The Koch Attack on Solar Energy.

Or as Daily Kos puts it:

The Koch Brothers are frequently described librertarian, but they want us all to be dependent on their dirty fossil fuel. They don’t care about anyone’s liberty but their own. They want to have the government to use eminent domain to take the land of ranchers and farmers to build Keystone XL to ship their dirty tar sands oil to Texas for refining and export. And they are demanding that the government taxes the sun.

This was written by Iron Knee. Posted on Saturday, April 26, 2014, at 7:47 am. Filed under Hypocrisy, Irony. Tagged Energy, Internet. Bookmark the permalink. Follow comments here with the RSS feed. Both comments and trackbacks are currently closed.