I keep hearing people freaking out about Ebola.

And most of the things people say about Ebola are myths that have been debunked.

Let’s get some perspective: 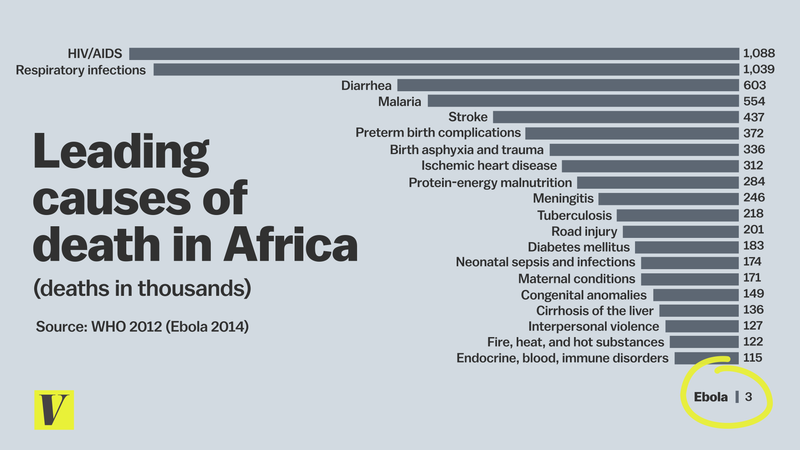 Virtually all of the deaths from Ebola have occurred in countries that have big public health problems, poor sanitation, and sub-standard medical facilities.

There have been 33 outbreaks of Ebola around the world in the past, and every one of them has been contained (even in those countries with big public health problems, poor sanitation, and sub-standard medical facilities).

Your chance of contracting Ebola is virtually zero. Don’t believe me? Watch the Director of Infectious Diseases at the NIH shut down the fear mongering coming from Fox News.

If you want something constructive to freak out about, how about deaths caused by drunk driving? Every year, in the US alone, more than 10,000 people die from car accidents caused by drunk drivers. That’s three times the number, in one year, in one country, than the total number of people who have ever died from Ebola in the whole world. And every one of those is preventable.

Or if you want a really easy way to prevent more than 7000 deaths in the US every year, vote out every single politician who voted against Medicaid expansion.

This was written by Iron Knee. Posted on Wednesday, October 8, 2014, at 12:30 am. Filed under Irony. Tagged Health. Bookmark the permalink. Follow comments here with the RSS feed. Both comments and trackbacks are currently closed.