Michele Bachmann may be leaving Congress, but she just had to make one last silly gesture. She took to Twitter this week and posted a photo of herself standing under a gasoline station sign with the caption “$2 gas, anyone?” 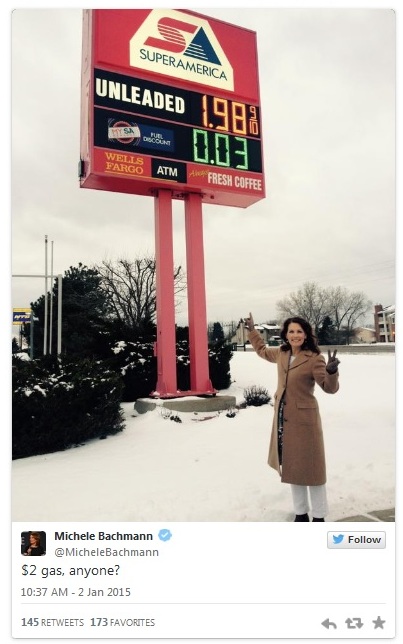 Just in case you didn’t get the message, conservative writer Mollie Hemingway retweeted it with the comment “Oh, look! Despite the mocking, Michele Bachmann predicted correctly after all.” Conservative rag WorldNetDaily ran the story under the headline “Michele Bachmann Gets Last Laugh at Her Critics.”

There is just one problem with Bachmann taking credit for the current low gas prices. During her failed run for the presidency Bachmann promised “Under President Bachmann you will see gasoline come down below $2 a gallon again. That will happen.”

She may have gotten the price right, but one has to wonder if she is aware that she isn’t president.

This was written by Iron Knee. Posted on Sunday, January 4, 2015, at 6:31 am. Filed under Irony. Tagged Energy. Bookmark the permalink. Follow comments here with the RSS feed. Both comments and trackbacks are currently closed.