The only reasonable response to the massacre of 12 people at the satirical French publication Charlie Hebdo is condemnation. It is never acceptable to respond to freedom of speech with violence and terror.

Having said that, however, there is quite a bit of irony around this event, and I would be remiss in my duties as Iron Knee if I did not mention it. But the fact that I bring it up should not be construed in any way that I have sympathy for the terrorists (or any terrorists).

The biggest irony is that the cover of Charlie Hebdo that was published just before the attack on their offices was not making fun of Islam. Instead, the cover was making fun of novelist Michel Houellebecq, whose negative attitude toward Islam is well known (he was once sued in court for calling Islam “stupid”). So how ironic is it that supposedly Islamic terrorists attacked the newspaper over a cover that was making fun of someone who doesn’t like Islam. Whatever happened to “the enemy of my enemy is my friend”?

In addition, AlJazeera published an article that makes a pretty good case that the attack on Charlie Hebdo was not about Islam at all. Two of the attackers were from Algeria, and another was from Senegal. These are both countries that suffered mightily under French colonialism (Algeria alone lost over a million lives in the ensuing brutal civil war, and Senegal was likely worse off).

It is also interesting that the reaction in Arab newspapers has been strongly against the attack.

Also ironically, there has been an outpouring of support for Charlie Hebdo, calling the massacre an attack on free speech. Really?

Back in 2009, Charlie Hebdo published a column by Maurice Sinet. Jean Sarkozy, the son of the French president, had just become engaged to the Jewish heiress of a successful electronics goods chain. The column commented on a rumor that Sarkozy was going to convert to Judaism by saying “He’ll go a long way in life, that little lad.” Relatively tame stuff, but the column was attacked as anti-Semitic (for linking prejudice about Jews and success). The editor of Charlie Hebdo asked Sinet to apologize and when he refused, he was fired. Sinet was then charged with the crime of “inciting racial hatred” and anti-Semitism. Where were the defenders of free speech then? Is it free speech when you make fun of Islam, but not when you make fun of Judaism?

Indeed, many of the people expressing support for Charlie Hebdo after the attack had condemned the newspaper in the past. Charlie Hebdo was an equal opportunity satirical publication, and it especially loved making fun of people with power and influence. In fact, a cartoonist for the newspaper who was not in the office at the time of the attack said in an interview “We vomit on all these people who suddenly say they are our friends.” He says it makes him laugh to get support from the Pope, Queen Elizabeth, and Vladimir Putin, all people who have been satirized by the publication.

Finally, I am tired of people attacking all of Islam because of the actions of a few terrorist extremists. Last week, comedian Bill Maher went on the offensive against Muslims, claiming that many of them supported the attack:

I could make a similar claim about Christians supporting the murder of people who worked in abortion clinics. Many Christians still claim that abortion is murder, which justifies the killing of abortion doctors and nurses. So should we (do we) condemn all of Christianity because of that?

Terrorism is wrong. But Muslims are not the only terrorists. Even including 9/11, only 6% of terrorist attacks between 1980 and 2005 in the US were carried out by Islamic extremists. You might think this is because the US is somewhat far away from Muslims. But in Europe (next door to Arab countries), Islamic extremists are responsible for only 0.4% of terrorist acts. 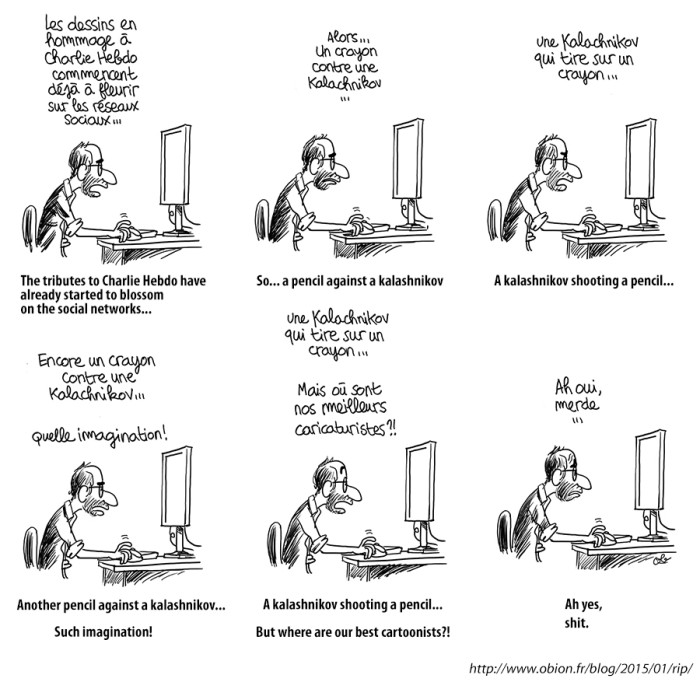 This was written by Iron Knee. Posted on Monday, January 12, 2015, at 12:55 am. Filed under Irony. Tagged Terrorism. Bookmark the permalink. Follow comments here with the RSS feed. Both comments and trackbacks are currently closed.