One of the wonderful things about the Internet is that it promotes disintermediation, also known as “cutting out the middlemen“. This can happen for more conventional products, where websites like eBay directly connect sellers and buyers.

But on the Internet, the primary product is content: music, video, information, opinion, etc. And net neutrality is a boon to both creators and consumers of content. Not so long ago, someone who wanted to create a TV show had to sell it to one of three networks, who acted as gatekeepers. Later, they had to sell it to a cable channel.

Net neutrality is a boon to writers, actors, musicians, and other content producers. New outlets like Netflix, Amazon.com, and YouTube “have sparked a surge in entertainment jobs that has helped drive employment in Hollywood to the highest level in a decade.”

Don’t underestimate the tectonic size of the shift in media consumption brought on by the Internet, even for more traditional content. For example, around 70% of the audience for the NBC show “The Tonight Show with Jimmy Fallon” watches it online. This makes the audience larger, because viewers can watch it when and where they want (rather than sitting in front of a TV set at 11:35pm when it airs).

The people who will benefit the most from net neutrality are the next generation of content producers, who have turned directly to the Internet as a way to reach consumers. For example, Christopher J Smith, who created an innovative faux documentary series that is distributed online, says “There’s no reason that anyone that creates content should be filtered by a fast track or a slow track. The Internet, when it’s the open platform it was designed to be, allows for a sense of equality — and for folks like me, ownership — that is not the norm in Hollywood.”

Another content producer makes a show that is distributed directly on YouTube. “I didn’t need anybody’s permission. You can make stuff, put it online and go directly to an audience.”

Net neutrality is also good for diversity, making it easier for Latino, Black, and Asians to create content and reach consumers. For example, the National Hispanic Media Coalition began lobbying five years ago for net neutrality. “We were unhappy in how we were underrepresented and stereotyped on the traditional media networks. We saw the Internet as a tremendous tool to share our stories and help organize our community for social justice.” 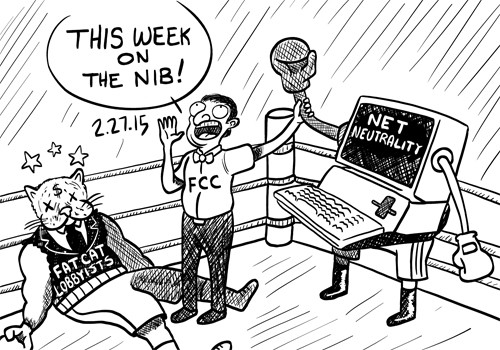 This was written by Iron Knee. Posted on Monday, March 2, 2015, at 12:30 am. Filed under Irony. Tagged Media. Bookmark the permalink. Follow comments here with the RSS feed. Both comments and trackbacks are currently closed.