Known By Their Deeds

Recently, Republicans have been trying to sound like class warriors, claiming that they care about the widening gap between the rich and the poor. Former VP candidate Paul Ryan (R-WI) complained that “The Obmamnomics that we’re practicing now have exacerbated inequality”, and added that only “the wealthy are doing really well.” In January, Mitt Romney (Mr. 47%) told the RNC that he was concerned that “the rich have gotten richer” and “income inequality has gotten worse”. Even Ted Cruz (R-TX) got into the act, warning that “Right now, the top 1 percent in this country, the millionaires and billionaires the president demagogues so much, earn a higher share of our national income than any time since 1928.”

Those are their words, but what do they plan to actually do about it?

Raise the minimum wage? Of course not!
Close tax loopholes that primarily benefit the wealthy? Never!
Extend unemployment benefits? That would only encourage freeloading.
Expand Medicare to the poor? Over their dead bodies!

What the GOP did do is vote to abolish the Estate Tax.

This is not another tax cut that favors the wealthy (like we have seen many times before), this is a massive $269 billion giveaway that ONLY benefits the top 0.2%. Already the first $10.86 million that a couple leaves behind when they pass away is not taxed (half that amount for individuals). So abolishing the estate tax entirely only benefits estates bigger than that, the richest of the rich.

Not only would this substantially increase income inequality, it dramatically enlarges the entrenched rich aristocracy that our founders fought to get rid of, creating a permanent elite of trust-fund babies.

And where does that $269 billion come from? The Republican bill simply adds the entire cost to the deficit, putting the lie to GOP claims of fiscal responsibility. 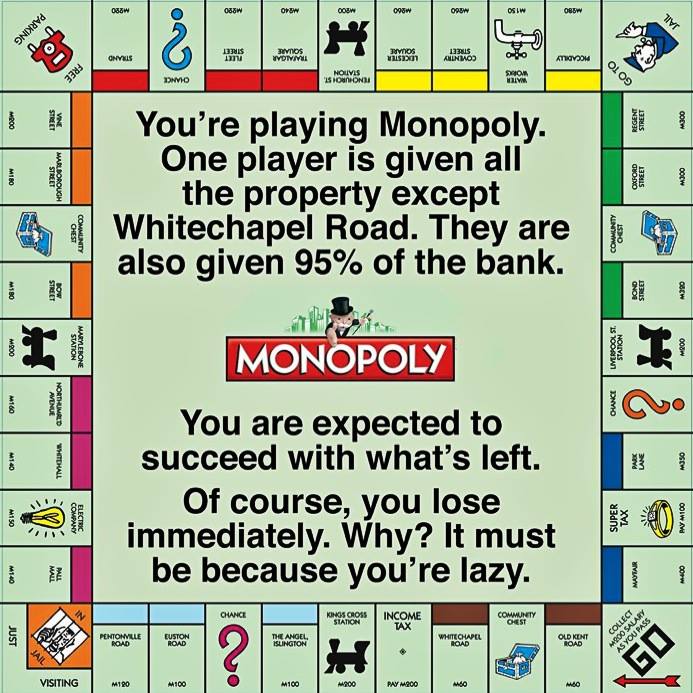 [In case you can’t tell, this image is based on the British version of the Monopoly game. Whitechapel Road is one of the two cheapest properties, like Baltic and Mediterranean in the US version.]

This was written by Iron Knee. Posted on Sunday, April 19, 2015, at 12:30 am. Filed under Hypocrisy. Tagged Estate Tax, Income Inequality. Bookmark the permalink. Follow comments here with the RSS feed. Both comments and trackbacks are currently closed.