Something in the Air

Last week, on tax day, Florida postal worker Doug Hughes managed to land his small, slow-moving gyrocopter on the lawn of the US Capitol, in one of the most protected airspaces in the world.

Many publications are focusing on the fact that he was able to evade our entire national defense system, but that should be no surprise to anyone. Complete security has always been, and will always be, a myth. Julius Caesar, the all-powerful leader of the Roman empire, couldn’t stop his friend Brutus from murdering him, and the US spending $600 billion a year on defense didn’t stop a handful of terrorists with box cutters on 9/11.

I hope this doesn’t overshadow the real message – why a mailman decided to risk his life to deliver a message to the US government. He is not a terrorist. Indeed, he went out of his way to alert the authorities in advance, sharing his plans with his local newspaper and keeping police informed.

The message delivered by Hughes is that our government has been corrupted by money – “legalized, institutionalized bribery” – and it is time to take our government back, “Because we the people own Congress”.

Hughes is also not a radical, he represents “moderates united by faith in principles of democracy”. He is not advocating extremist views, unless you consider the founding fathers of this country to be extremists. 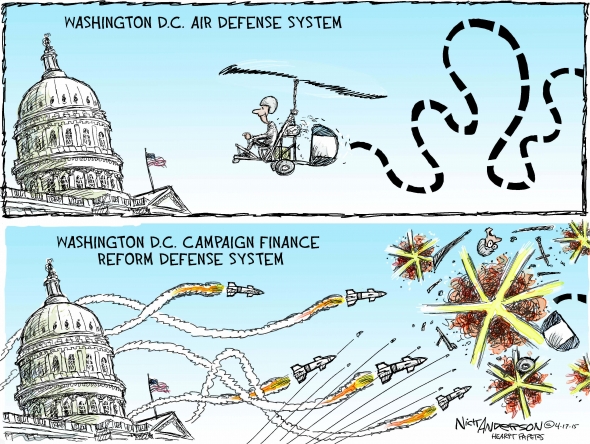 This was written by Iron Knee. Posted on Wednesday, April 22, 2015, at 12:30 am. Filed under Irony. Tagged Campaign Finance, Corruption. Bookmark the permalink. Follow comments here with the RSS feed. Both comments and trackbacks are currently closed.