Not So Secret Anymore

The Second Circuit US Court of appeals has ruled that the NSA cannot perform mass surveillance of telephone records anymore. The legal analysis by the EFF is a short read and definitely worth it. But if you are too lazy to read that, here is the tl;dr version from BoingBoing:

1. When Congress gave the NSA the power to gather “relevant” information and do so for an “investigation,” they didn’t mean “gather everything and store it forever in case it becomes relevant later.”

2. Having your data collected by the NSA gives you the right to sue them — even if the NSA never looked at that data.

3. Metadata is sensitive information, and the NSA can’t argue that its mass-spying is harmless because it’s collecting metadata instead of data (the fact that you called a suicide hotline is every bit as compromising as what you said while you were talking to them).

4. The judges have “concerns” about the constitutionality of mass spying (though they didn’t go so far as to say that it is unconstitutional, partly because the ACLU had already won on the statutory language alone).

5. One judge added: The government shouldn’t have secret laws. The government argued that its interpretation of surveillance laws was a secret, and the court spanked them for it, saying that a law that’s “shrouded in secrecy” lacked legitimacy.

This is a breakthrough ruling against mass spying performed on ordinary, law-abiding Americans, and the ACLU deserves massive kudos for bringing and winning this lawsuit. Also kudos to whistleblower Edward Snowden, who released the secret documents that made this suit possible. 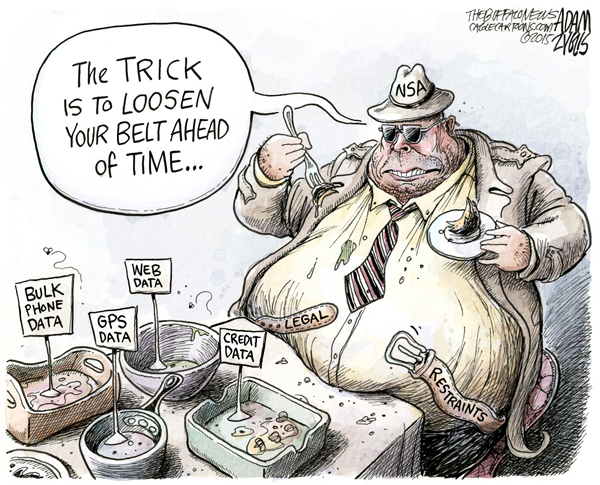 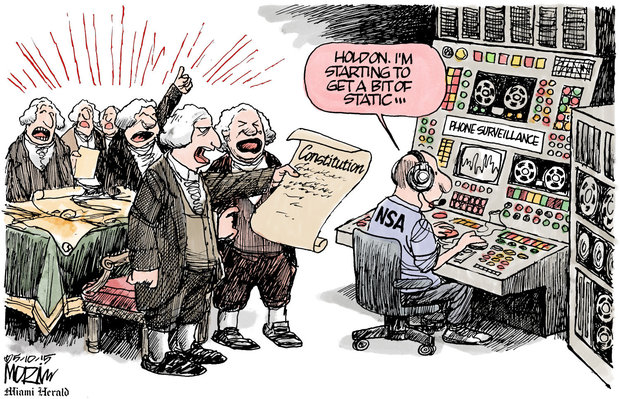 This was written by Iron Knee. Posted on Tuesday, May 12, 2015, at 6:52 am. Filed under Irony. Tagged Privacy, Spying. Bookmark the permalink. Follow comments here with the RSS feed. Both comments and trackbacks are currently closed.