Justice Scalia is Not Happy

One might even say that he isn’t very gay.

It was bad enough yesterday when the Supreme Court deflected a challenge to Obamacare (over his vigorous dissent), but today it legalized same-sex marriage in the whole country. In Scalia’s dissent to the gay marriage ruling, he quoted from the majority opinion and gave his version of sound legal advice: 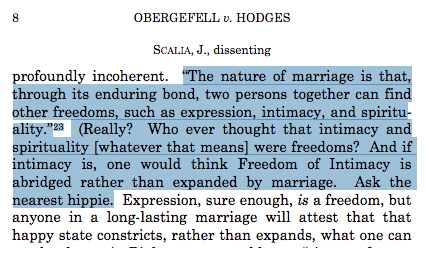 Fortunately, history has passed Scalia by. Gay marriage is no threat to our country (it is a boon), and hippies haven’t been called that for a very long time. The new theory is that “Scalia has been a secret goth this whole time”.

This was written by Iron Knee. Posted on Friday, June 26, 2015, at 10:34 am. Filed under Humor. Tagged Gays, Supreme Court. Bookmark the permalink. Follow comments here with the RSS feed. Both comments and trackbacks are currently closed.