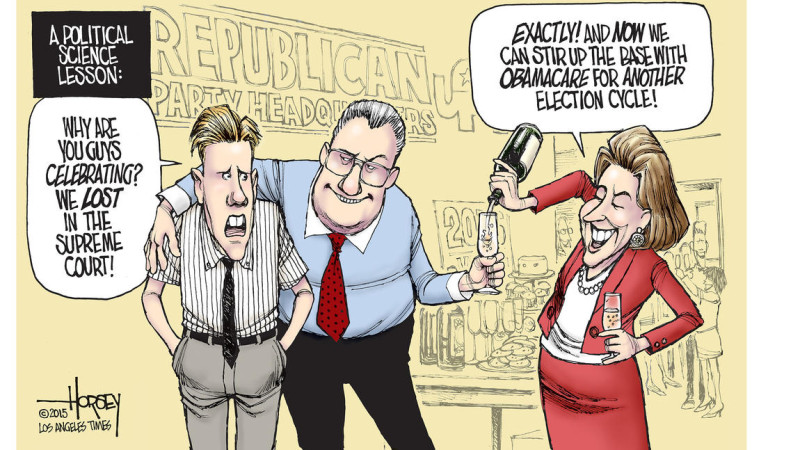 Do you ever wonder why so little of the radical conservative agenda ever becomes reality? For example, even when the GOP controlled all three branches of our government, abortion remained legal.

Remember when gays were the favorite whipping boys of Republican political candidates? And now, the Supreme Court opinion legalizing same sex marriage was written by none other than justice Anthony Kennedy, who was appointed by the sainted Ronald Reagan! This is doubly ironic as Reagan pledged to appoint only “true conservatives” to the highest court and instituted a rigid “litmus test” for candidates.

And that’s just social issues. On the fiscal side, despite talk of reduced government spending, Republicans have generally spent like drunken sailors. Remember Medicare Part D? Increased military spending? The only real difference is that they refused to raise taxes to support their spending sprees.

Republicans will continue to oppose the ACA, but will they ever actually do anything about it? Why would they, when opposing it gets them so many votes and campaign contributions?

This was written by Iron Knee. Posted on Friday, July 3, 2015, at 12:30 am. Filed under Irony. Tagged Conservatives, Gays, Health. Bookmark the permalink. Follow comments here with the RSS feed. Both comments and trackbacks are currently closed.