“Donald Trump announced that he’s running for president. During his speech he told the crowd that if elected he would be ‘the greatest jobs president that God ever created.’ Then God said, ‘Hey, don’t drag me into this publicity stunt.'” – Jimmy Fallon

“In his presidential announcement speech yesterday, Donald Trump pledged to become ‘the greatest jobs president that God ever created’. This is from the man who coined the catch phrase ‘You’re fired’.” – Conan O’Brien

“Donald Trump is running for president, and I couldn’t be happier about it. He promised he would be ‘the greatest jobs president that God ever created.’ I think President Trump would be a very good thing for jobs in this country — specifically for my job here at this show.” – Jimmy Kimmel

“Political analysts are saying that as a candidate, Donald Trump is ‘a totally unqualified nuisance’. In other words, he is a legitimate contender for the Republican nomination.” – Conan O’Brien

“Donald Trump told ABC news that if he had Oprah as a running mate, they could easily win. Although you know who’d definitely win? Oprah WITHOUT Donald Trump.” – Jimmy Fallon

“Presidential hopeful Donald Trump said yesterday that he has better hair than Senator Marco Rubio – a claim that was recently disproven by wind.” – Seth Meyers 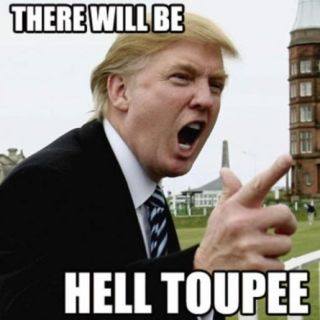 This was written by Iron Knee. Posted on Saturday, July 4, 2015, at 12:15 am. Filed under Humor. Bookmark the permalink. Follow comments here with the RSS feed. Both comments and trackbacks are currently closed.