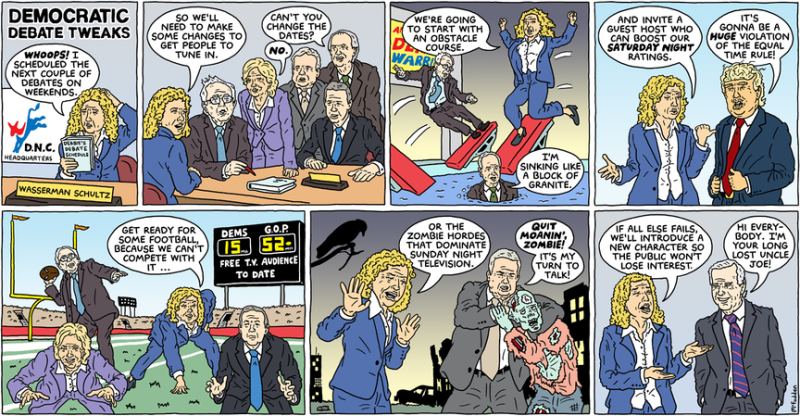 It’s true, the upcoming Democratic debates are all scheduled on weekends. Even if you ignore claims that this was done on purpose, it is clear that this will benefit Hillary Clinton. But nobody should be the least bit surprised by this. The party primaries are one of the least democratic aspects of our elections. Political parties exist to do the best for the political parties, not for the candidates or even the country. If you ever doubt this, just watch any political convention.

Which brings us to the second ironic point of this comic – media exists to get ratings. The media loves Donald Trump, because he has given them lots of high ratings.

We are one (more) step along the path to turning our elections into huge, expensive, reality TV shows, with candidates getting voted off the island (or fired by Trump). Eventually, maybe the candidates will fight it out, Roman gladiator style, until one is declared Caesar. The ratings will be HUGE.

This was written by Iron Knee. Posted on Monday, October 26, 2015, at 12:37 am. Filed under Irony. Bookmark the permalink. Follow comments here with the RSS feed. Both comments and trackbacks are currently closed.