Can You Hearing Me Now? 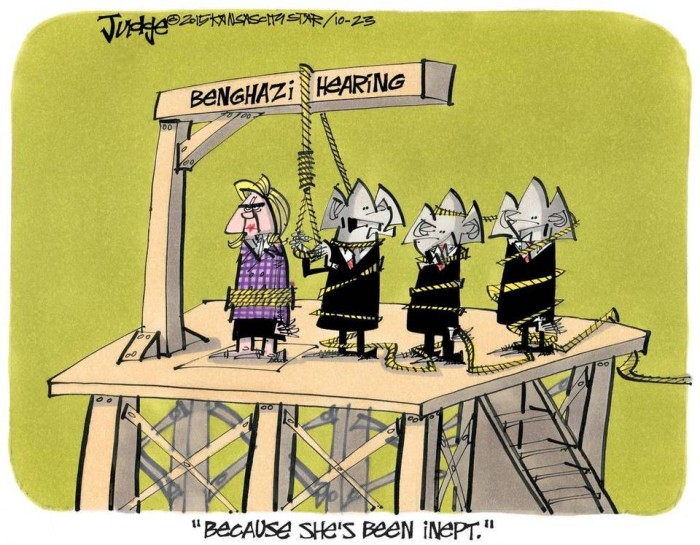 After several Freudian slips confirming that the latest Benghazi Hearings are exactly what everyone expected – a partisan political witch hunt designed to hurt Hillary Clinton’s presidential campaign, the committee stupidly went ahead with their 11-hour long grilling of Clinton, live on TV.

Various mainstream media outlets declared Clinton the winner. NBC News said “As a matter of pure political theater, yesterday’s Benghazi committee hearing was a victory for Hillary Clinton and an overwhelming defeat for House Republicans.” The Washington Post headline was “Hillary Clinton triumphed at the Benghazi hearing by not losing her cool.”

Amazingly enough, even Fox News – who have always been the major cheerleaders for investigating Benghazi – agreed. Apparently even they are tired of the endless hearings. Even before the hearing was over, Ed Henry said on Fox “In terms of the narrative on Benghazi, there was no major new development that rocked her side of the story, that changes this in some way. What you have here is another big test for Hillary Clinton, and another big test that she appears to have passed.” Henry also said that Clinton “looked presidential and was in command” and called the hearings a “total wipeout” for GOP members. Greta van Susteren agreed, and said that Clinton was acting more like the politician she had watched over the years than the tentative, stumbling Clinton of this campaign so far.

The hearings are a waste of time because everything about it is politicized and nothing is going to happen. There will be no scalp collection.

A hearing billed as an epic, High Noon-style confrontation—granted, the hype came from the media, not Republican committee members themselves—instead turned out to be a somewhat interesting look at a few limited aspects of the Benghazi affair. In other words, no big deal. And that is very, very good news for Hillary Clinton.

Stephen Hayes in The Weekly Standard:

The coverage of the hearings—from the earliest tweets to the final page-one wraps—focused almost entirely on the style of Clinton’s performance rather than the substance of her testimony. And it must be said: She was impressive.

The cover of the Boston Herald: “HILLARY SKATES THROUGH MARATHON BENGHAZI HEARING”.

Even Republican Congressman Trey Gowdy, who is in charge of the hearings, admitted “I don’t know that she testified that much differently today than she has the previous time she testified.” What is that saying about doing the same thing over and over, expecting different results?

This was written by Iron Knee. Posted on Sunday, October 25, 2015, at 12:30 am. Filed under Irony. Tagged Republicans. Bookmark the permalink. Follow comments here with the RSS feed. Both comments and trackbacks are currently closed.