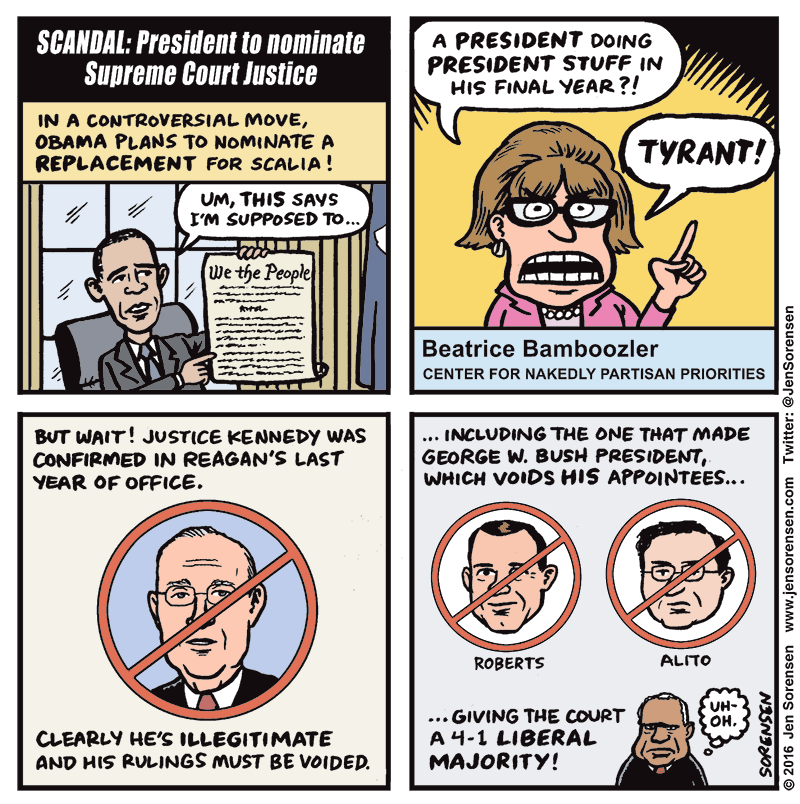 It is the job of Obama to nominate a new Supreme Court justice. Republican demands that we wait until after the election so the appointment can follow the “will of the people” ignores the will of the people when they elected Obama (twice!). Obama has a chance to create a court that can overturn bad decisions like Citizens United. He should take it.

On the other hand, it is the job of Congress to block Supreme Court nominees they don’t think would do a good job. And obviously, the Republicans think that only a staunch conservative would do a “good” job. But they too are stuck in a tight spot. If Republicans in Congress give in and confirm someone, their base will go ballistic and punish them in the primaries. If they don’t, the electorate will punish them in the general election.

My guess is that the Republicans will continue to rattle their Supreme Court sabres until the primaries are over, and will then magically decide to confirm someone so it can’t be used to hurt them in the general election.

UPDATE: The Atlantic has a must-read piece on how the current hysteria might change the court.

This was written by Iron Knee. Posted on Thursday, February 18, 2016, at 12:30 am. Filed under Irony. Tagged Republicans, Supreme Court. Bookmark the permalink. Follow comments here with the RSS feed. Both comments and trackbacks are currently closed.