Cutting out the Middlemen

Donald Trump’s popularity is largely based on one simple premise, that he is so rich he can’t be bought, so he will not be beholden to special interests and the lobbyists who run Washington. Trump has repeatedly claimed that he hates lobbyists and that they can’t influence him.

So why would anyone be surprised that Trump just hired a lobbyist to run his campaign? And of course, Trump hired one of the “best people” he is always talking about. He hired Paul Manafort. Manafort doesn’t lobby for just anyone. He specializes in being hired by corrupt dictators who want to gain influence in Washington.

Remember Ferdinand Marcos of the Philippines? His dictatorship was infamous for corruption, extravagance, and brutality, while ruling under martial law. His family plundered somewhere between 5 and 10 billion dollars (storing it in offshore bank accounts) by running up the Philippine national debt. His wife, Imelda Marcos, a former model and beauty queen, became famous for owning a collection of more than a thousand pairs of expensive shoes. And Marcos paid Manafort to keep the US government on his side.

Manafort also worked for a former dictator from the Ukraine, who was forced out of office. He also did work for Saudi Arabia, for a foreign president who was suspected of running a drug-smuggling operation, as well as an African rebel leader accused of torture. Anytime a corrupt foreign leader needs to buy off Washington politicians, Manafort is your go-to lobbyist.

As Bloomberg puts it “Trump just hired his next scandal“:

Trump has criticized both parties as selling out the U.S. to foreign interests. Now he is counting on a man who has represented many of them.

I guess if anyone is going to sell us out to foreign interests, Trump plans on doing it himself. I wonder what kind of shoes Melania likes? 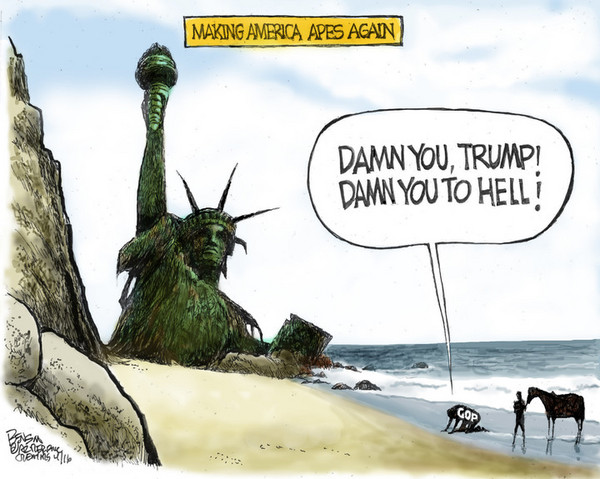 This was written by Iron Knee. Posted on Monday, April 25, 2016, at 12:35 am. Filed under Hypocrisy. Tagged Election, Trump. Bookmark the permalink. Follow comments here with the RSS feed. Both comments and trackbacks are currently closed.