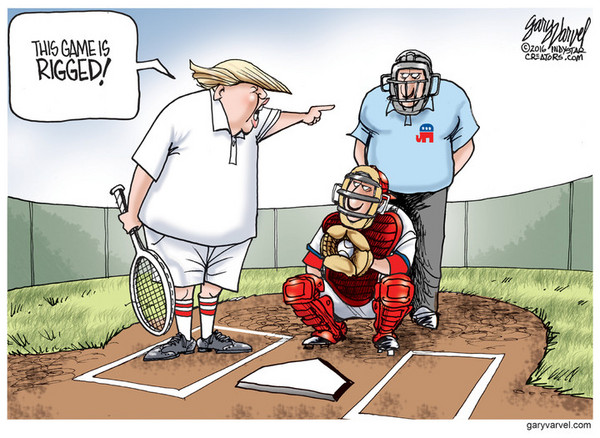 After gaming the political “game” any way he could for the last year, Donald Trump is complaining that the game is being rigged against him. Is he nuts? The GOP delegate rules haven’t changed recently, and Trump was just too lazy or stupid to pay any attention to them.

But an article by Nate Silver points out that Trump’s complaints are working. Recent polling shows that even though only 40% of Republicans want Trump to be the nominee, 62% agree with him that the candidate who gets the most pledged delegates should be the Republican nominee, even if that candidate doesn’t have a majority.

That’s right, a billionaire who has had his life handed to him on a silver platter has succeeded in painting himself as a victim and an underdog. The man who has lied and cheated throughout his whole life to get whatever he wanted is now calling the nomination rules “crooked”.

Should Trump be able to win with a plurality and not a majority? The GOP has required its nominees to receive a majority of delegate votes for 160 years, and during that time at least seven candidates have come into the Republican convention with a plurality of the delegates and yet failed to become the nominee.

Besides, given how polarizing Trump is, it is easy to surmise that a majority of voters do not want Trump to be the nominee. That’s why the rules are set up the way they are. If nobody gets a majority on the first vote, then candidates are supposed to drop out until someone gets a majority. And yet Trump claims that this would be tantamount to stealing the nomination from him.

This was written by Iron Knee. Posted on Monday, April 25, 2016, at 12:30 am. Filed under Hypocrisy. Tagged Election, Trump. Bookmark the permalink. Follow comments here with the RSS feed. Both comments and trackbacks are currently closed.