The Candidate of Misinformation

A detailed analysis of voting during the Republican primaries shows that two of Donald Trump’s main claims – that he is bringing in new voters to the Republican party, and that he is even attracting Democrats to vote for him – are just lies and misinformation. Or as Politico puts it:

Donald Trump likes to say he has created a political movement that has drawn “millions and millions” of new voters into the Republican Party. “It’s the biggest thing happening in politics,” Trump has said. “All over the world, they’re talking about it,” he’s bragged.

But a Politico analysis of the early 2016 voting data show that, so far, it’s just not true.

It is true that GOP turnout during the primaries is way up, but these are not new voters. Instead, these are staunch Republicans who have voted reliably in the general election, but who (until now) rarely voted in primaries (many were voting in the primary for the first time).

So while the GOP primaries have been exciting, the 2016 electoral map is still tilted against the Republicans. Trump is not getting anywhere enough new voters to change that. Furthermore, the excitement in the primaries doesn’t translate into excitement in the general election. Indeed, Trump is so unpopular with young people, Latinos, Asian-Americans, and African-Americans, that it is likely to have the opposite effect.

And speaking of misinformation, which one of these two popular Trump themes is true? 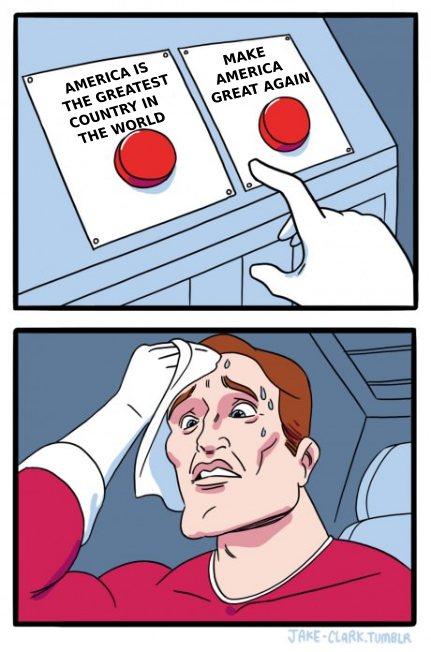 This was written by Iron Knee. Posted on Wednesday, May 18, 2016, at 5:30 am. Filed under Irony. Tagged Trump. Bookmark the permalink. Follow comments here with the RSS feed. Both comments and trackbacks are currently closed.