Friday, VP nominee Mike Pence appeared on conservative Hugh Hewitt’s radio show and condemned President Obama for referring to Donald Trump as a “homegrown demogogue”. Pence said, seemingly without irony “I don’t think name-calling has any place in public life. And I thought that was unfortunate that the president of the United States would use a term like that.”

Is Pence unaware of who his running mate is? According to the Washington Post, “At almost exactly the same time as the Pence transcript was being sent out to reporters, here’s what Trump was tweeting:” 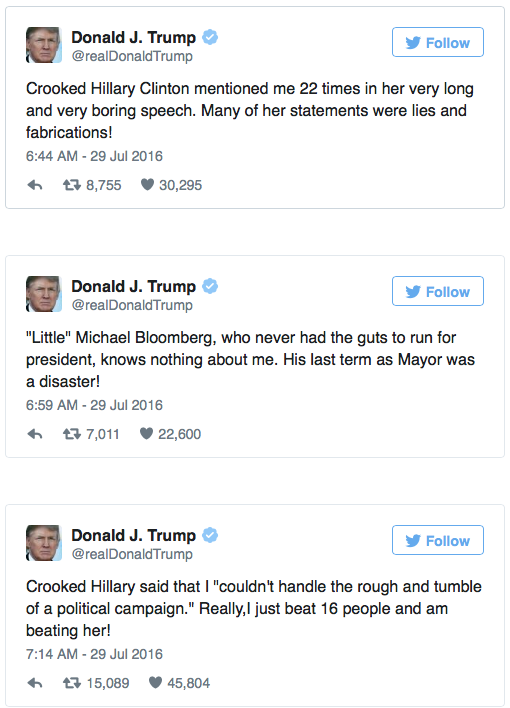 And that doesn’t even include “Lyin’ Ted Cruz”, or all of the “losers” and “morons”. Heck, is there anyone that Trump hasn’t called a name, other than Vladimir Putin?

UPDATE: The New York Times has a list of 250 people, places, and things that Donald Trump has insulted on Twitter, including the names he has called them. They keep the list updated, so it continues to grow. They highlight the insults that are from the last 60 days. And no, Putin is not on the list. The winner of receiving the most insults is Hillary Clinton. Trump must really be afraid of her.

My favorites include him insulting CNN for being “so negative”. And insulting a podium/lectern in the Oval Office as being “not good” and “looks odd”. He even insulted a song by Neil Young after being asked to stop using it at his campaign events. He insulted five countries (Britain, Germany, Iran, Mexico, and Saudi Arabia, but not Russia).

He has also insulted just about every Republican politician, including those who support him, and the Republican Party.

This was written by Iron Knee. Posted on Saturday, July 30, 2016, at 12:15 am. Filed under Hypocrisy. Tagged Trump. Bookmark the permalink. Follow comments here with the RSS feed. Both comments and trackbacks are currently closed.