Donald Trump famously has a very thin skin. If you say something negative about him, he attacks you and calls you names. Well, unless he wants something from you.

But the worst thing you can do to Trump is not pay attention to him. It wouldn’t surprise me if he started a nuclear war just to spite someone or get attention. 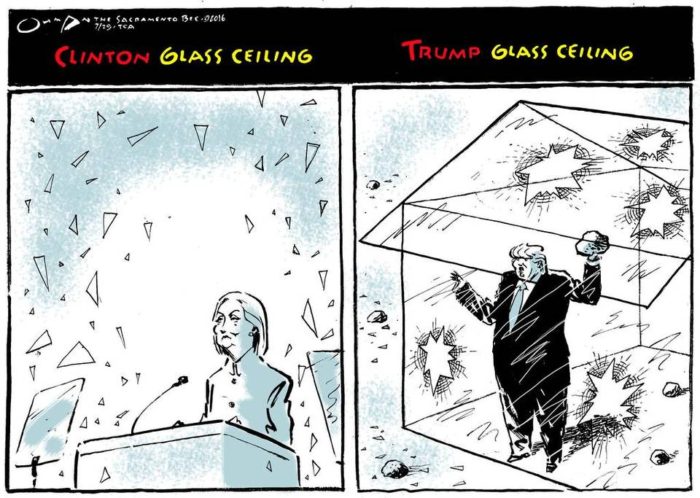 While Trump is good at blustering and bloviating, Hillary Clinton is relatively boring. Which is a very good thing. But she has already achieved something historic, and that’s not boring at all.

UPDATE: That was quick — we already have a new Trumper Tantrum. On Saturday, Trump fought back against Khizr Khan, the Muslim man whose son died an American war hero in Iraq, and who gave a powerful speech at the DNC. Khan said that Trump has “sacrificed nothing” for his country.

So of course, Trump is throwing a hissy fit, saying “I think I’ve made a lot of sacrifices. I work very, very hard.” And adding that he has created “thousands and thousands of jobs”, and has raised “millions of dollars” for veterans. Of course, the Washington Post discovered that Trump lied about the amount of money he raised for veterans. Furthermore, that isn’t the first time Trump lied about his charitable giving.

In the same interview, Trump doubled down, and for good measure started talking trash about Khan’s wife, Ghazala, who stood next to her husband during his speech but did not speak. Trump said she looked “like she had nothing to say”. He then added “She probably, maybe she wasn’t allowed to have anything to say. You tell me.”

But just the day before, an interview with Ghazala Khan was broadcast on MSNBC, which puts the lie to Trump. In that interview she said she didn’t speak at the convention because she is still overwhelmed by grief, and could not look at her son’t photos without crying.

Trump has absolutely no shame.

UPDATE 2: Trump’s tone-deaf protests that he has suffered hardships “prompted ridicule on Twitter under the hashtag #TrumpSacrifices, with users listing such hardships as flying commercial class and playing on a municipal golf course.”

Trump’s attacks on Khizr and Ghazala Khan prompted rebukes from both Democrats and Republicans. But Trump just continued the attacks, saying “While I feel deeply for the loss of his son, Mr Khan, who has never met me, has no right to stand in front of millions of people and claim I have never read the Constitution, (which is false) and say many other inaccurate things.” During his DNC speech, Khan questioned the constitutionality of Trump’s proposed ban on Muslims, and asked if Trump had even read the constitution or visited Arlington National Cemetery. But apparently Trump doesn’t understand rhetorical questions.

What he said originally — that defines him … People are upset with him. He realizes, and his advisers feel that [his original statement] was a stupid mistake. That proves that this person is void of empathy. He is unfit for the stewardship of this great country. You think he will empathize with this country, with the suffering of this country’s poor people? He showed his true colors when he disrespected this country’s most honorable mother… all the snake oil he is selling, and my patriotic, decent Americans are falling for that. Republicans are falling for that. And I can only appeal to them. Reconsider. Repudiate. It’s a moral obligation. A person void of empathy for the people he wishes to lead cannot be trusted with that leadership. To vote is a trust. And it cannot be placed in wrong hands.

As for Trump’s attacks on his wife, Khan said that Trump’s words were “typical of a person without a soul.”

Emotionally and physically — she just couldn’t even stand there, and when we left, as soon as we got off camera, she just broke down. And the people inside, the staff, were holding her, consoling her. She was just totally emotionally spent. Only those parents that have lost their son or daughter could imagine the pain that such a memory causes. Especially when a tribute is being paid. I was holding myself together, because one of us had to be strong. Normally, she is the stronger one. But in the matter of Humayun, she just breaks down any time anyone mentions it. 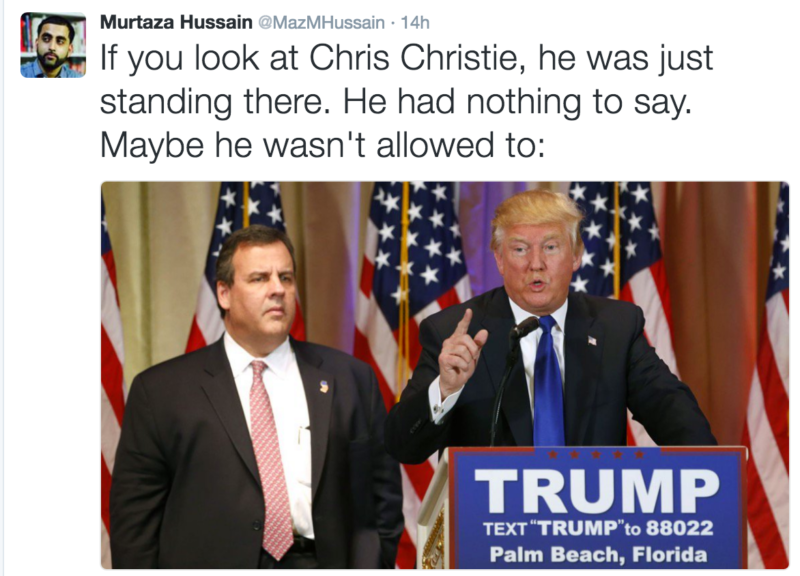 UPDATE 3: The Washington Post this morning published an article by Ghazala Khan. You should read the whole thing, but the last paragraph is “Donald Trump said he has made a lot of sacrifices. He doesn’t know what the word sacrifice means.”

And incidentally, even though Trump claims to have read the constitution, apparently it didn’t stick. Earlier this month, Trump spoke to congressional Republicans and told them that he would be the “best constitutional president ever” and promised to protect “Article XII”. However, the constitution only has seven articles. Oh, and he also told the Republicans that golf legend Jack Nicklaus would be attending the RNC, but Nicklaus’ spokesman said that was “inaccurate”. It is a good thing for Trump that we have so many ways to describe a “lie”.

This was written by Iron Knee. Posted on Saturday, July 30, 2016, at 12:58 pm. Filed under Humor. Tagged Trump. Bookmark the permalink. Follow comments here with the RSS feed. Both comments and trackbacks are currently closed.