His Own Lawyers Testified that Trump Lies

In early 1990s, Donald Trump had 3 major bankruptcies: The Trump Taj Mahal Casino, Trump Plaza, and The Trump Castle. As reported by the Washington Post, these failures were largely self inflicted.

Trump’s bankruptcy lawyers were Patrick McGahn and George Miller. In a 1993 bankruptcy deposition of McGahn comes the following curious exchange:

Q. Did Mr. Miller always do everything together with you when he was active in this case?
A. Not everything, but we — it’s always been our practice to make sure that two people are present, and we don’t have a problem of people lying.
Q. You are meeting with your client?
A. That’s right, your client. Hey, Trump is a leader in the field of expert — he’s an expert at interpreting things. Let’s put it that way.
Q. That’s interestingly put. As I recall in your letter to Mr. DeSanctis, which we marked yesterday, you indicated the policy of your office was to have two attorneys present for meeting with public officials?
A. Correct.
Q. Here, you are meeting with your client?
A. That’s right.
Q. Was it necessary for both you and Mr. Miller to always attend the meeting —
A. We always do that.
Q. Always?
A. We tried to do it with Donald always if we could because Donald says certain things and then has a lack of memory.

In plain English, Trump’s own lawyers say he lies so much they had to meet with him in pairs so they would have a witness to what he said.

What we see is that Trump is not only a pretty piss-poor businessman, he isn’t even a very good liar. 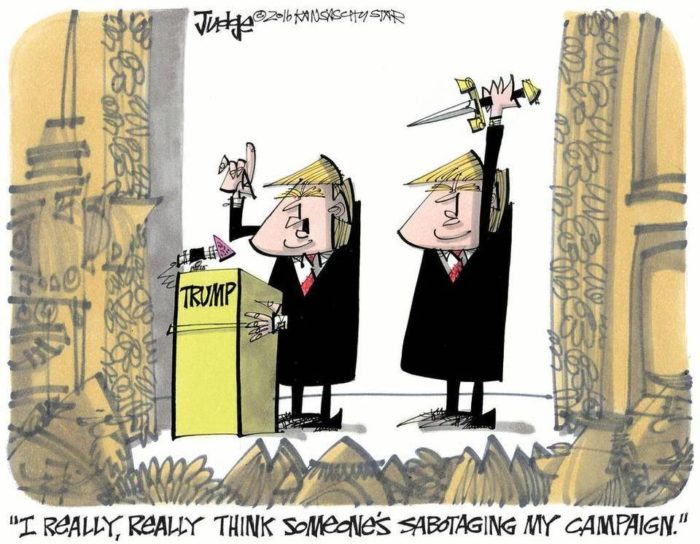 If you liked this, you might also like these related posts:
This was written by Iron Knee. Posted on Sunday, October 9, 2016, at 12:30 am. Filed under Irony. Tagged Lies, Money, Trump. Bookmark the permalink. Follow comments here with the RSS feed. Both comments and trackbacks are currently closed.