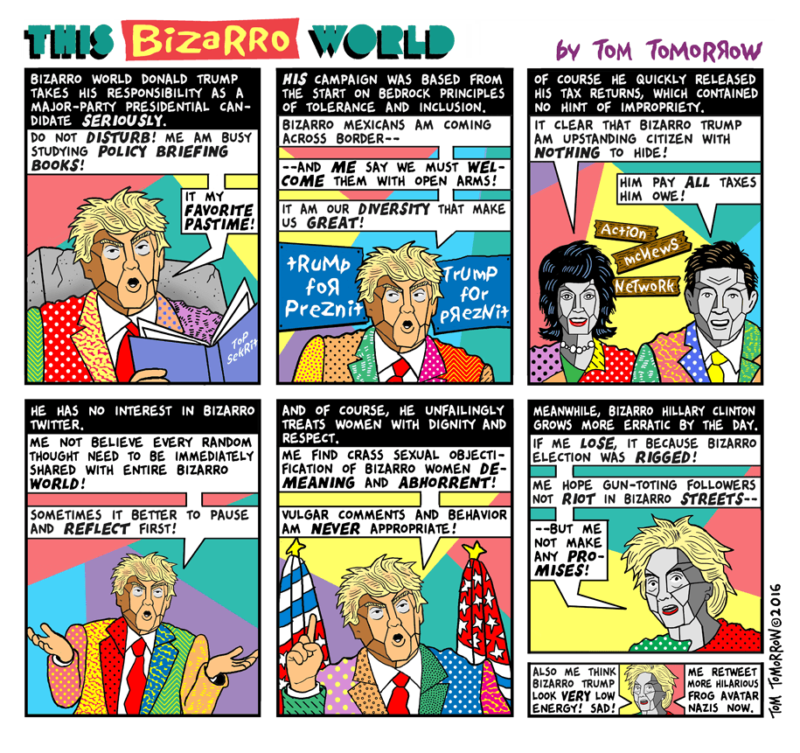 Is it sad to realize that if Hillary Clinton had done even one-tenth of the bizarre things that Donald Trump has done, she would have been laughed out of the presidential race long ago.

The same thing is true of the other two candidates. Heck, Gary Johnson was derided because he misunderstood a question about Aleppo, and Jill Stein is just laughed at for no particular reason. I’m not saying people should vote for Johnson or Stein — there are very good reasons not to vote for them — but it is unfortunate that the main things being used against them have nothing to do with their policy positions or experience.

Now that Trump has announced that he is going nuclear on everyone, including his own party, I’m really hoping that the same thing happens at the national level that happened in California. After Governor Schwarzenegger, the Democrats swept into power and really cleaned up the mess that was California, fixed the economy, solved the budget crisis, and generally put California back on track.

And I even think that this would be the best thing for Republicans. Their party created the monster that is Donald Trump through the “Tea Party”, demonizing their opponents, and stirring up hatred and resentment. Unfortunately, that strategy worked for a while for them (at least getting them elected), but it has to stop. And I’m still hoping that the majority of Americans are aware enough to realize that they have been (and are still being) manipulated and lied to.

This was written by Iron Knee. Posted on Wednesday, October 12, 2016, at 12:20 am. Filed under Irony. Tagged Elections. Bookmark the permalink. Follow comments here with the RSS feed. Both comments and trackbacks are currently closed.