During the presidential campaign, Donald Trump answered questions about his lack of experience by claiming that he would hire the best people to run his administration.

But apparently, that was just another lie. We are just one month into his administration, and already he has lost a White House Communications Director, National Security Advisor, Secretary of Labor, Secretary of the Army, and it looks like he is about to lose his nominee for Secretary of the Navy. And on Sunday, another top appointee was fired after criticizing Trump. That is not a great track record.

Trump is not living up to his promise to hire the best people and let them run the administration. In particular, his cabinet members are not allowed to pick their own staff. For example, the White House would not let Secretary of State Rex Tillerson (who has no political experience) hire Elliott Abrams (who had held extensive foreign policy positions in the Reagan and second Bush administration) because Abrams criticized Trump during the campaign.

Trump wants to hire people who have never criticized him, which leaves out pretty much all Democrats, many Republicans (including those with the most experience) and members of many minority groups that were insulted by Trump. In addition Trump has given preference to big donors to his campaign (people like new Secretary of Education Betsy DeVos). No wonder he is having problems finding good people.

Even so, a few reasonable people have made it into his administration, including Secretary of Defense James Mattis, Secretary of Homeland Security John Kelly, and CIA Director Mike Pompeo. These people have been nicknamed “the grownups”.

However, Trump seems to be ignoring the grownups in his administration. For example, this week Donald Trump dropped our longstanding support for a two-state solution to the Middle East — without even talking to the state department. As a result, Tillerson and Mattis have spent almost all their time in cleanup mode, trying to undo the messes that Trump keeps creating that are disrupting the rest of the world.

Similarly, Trump’s meddling in foreign affairs seems to reward countries whose leaders either kiss up to him (e.g., Russia, Israel), or which do things that reward him and his family financially. In particular, Trump dropped all of his criticisms of China right after China reversed itself and awarded Trump’s business valuable trademarks.

In summary, Trump has no idea what he is doing, yet he keep firing from the hip without warning. He is hiring sycophants and donors who tell him everything is going well, and his own decisions seem strongly influenced by potential personal gain. In addition, he is already starting his 2020 campaign. 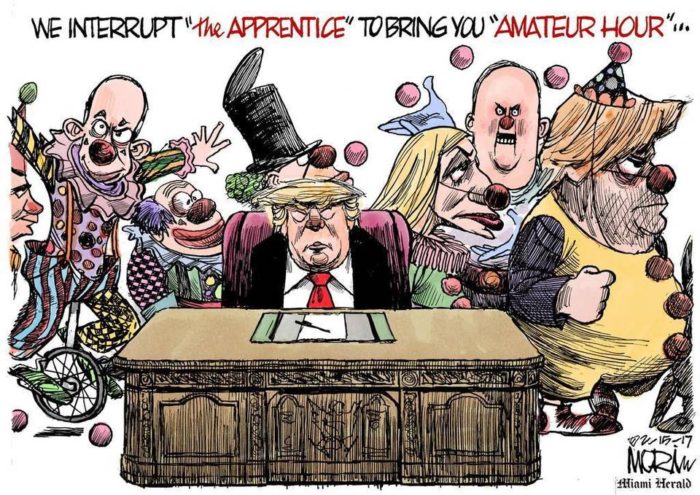 This was written by Iron Knee. Posted on Monday, February 20, 2017, at 12:30 am. Filed under Irony. Tagged Trump. Bookmark the permalink. Follow comments here with the RSS feed. Both comments and trackbacks are currently closed.