On Friday, Donald Trump gave a speech at CPAC. But before Trump spoke someone wearing a suit passed out Red, White, and Blue flags with Trump’s name on them. People began waving them.

Except, the colors were not in that order, they were White, Blue, and Red. Apparently unbeknown to the attendees, that is the Russian flag. They were waving Russian flags for Trump. At Trump. 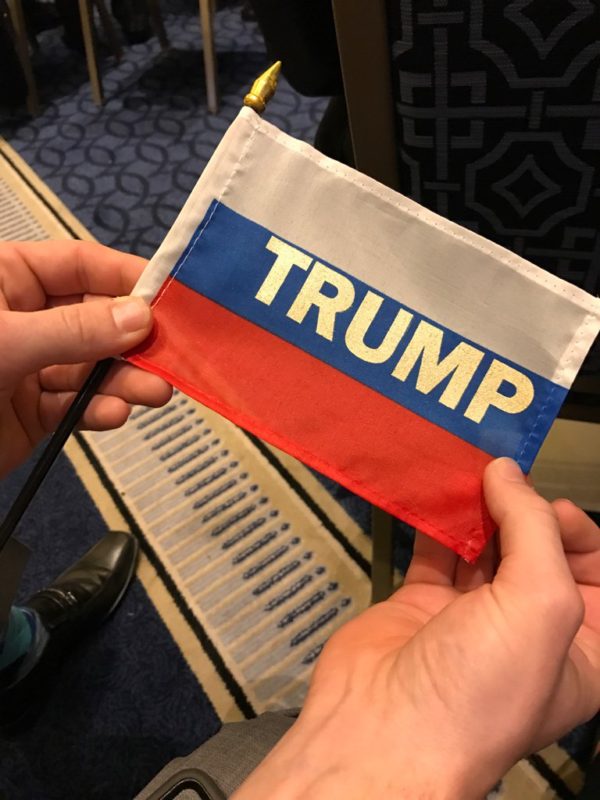 Conference staff were alerted and went around confiscating the flags.

And one reporter spotted someone wearing a “Make Russia Great Again” T-shirt.

This is especially significant now, given the new revelation that the White House sent a request to the FBI to publicly knock down media reports that Trump campaign staffers were in frequent contact with Russian government officials. The FBI refused. The White House is not allowed to intervene in FBI investigations.

UPDATE: The pranksters who pulled this off reveal themselves. Pretty funny.

This was written by Iron Knee. Posted on Friday, February 24, 2017, at 2:22 pm. Filed under Humor. Tagged Conservatives, Russia, Trump. Bookmark the permalink. Follow comments here with the RSS feed. Both comments and trackbacks are currently closed.