Monday, the CBO (Congressional Budget Office) report on the Republican health care bill came out, and it was even harsher than I expected. The CBO says that the new bill will increase the number of uninsured by 86%. Donald Trump promised that no Americans would lose coverage.

In fact, the Republican bill is so bad, it will make things worse than before Obamacare. In the first year alone, the number of people without health insurance will increase by 14 million. Not only that, but premiums for the people who still have insurance will increase (on average) 15 to 20 percent. The individual market and older people will see the largest increases.

The only “good” news from the CBO is that the new bill will decrease the deficit, but only because it will severely cut Medicaid, reducing enrollment by 14 million unlucky people. Some of that savings will reduce the deficit, but the rest will go into tax cuts for the wealthy. Of course, that savings is a mirage, because as we know these people will still get sick, and will end up in emergency rooms (which are required to treat anyone regardless of ability to pay). So in the end, we will pay for that too in the form of higher hospital charges to make up for the shortfall.

I’m guessing the Republicans knew this report was going to be bad, because they have been falling over each other trying to discredit the CBO. They couldn’t really attack the CBO as being partisan, because Republicans appointed its director in 2015.

Instead, Republicans attacked the CBO’s accuracy, complaining that the CBO projected in 2010 that the ACA would reduce the ranks of the uninsured by 30 million, but so far only 22 million have gained insurance under the bill. What the GOP conveniently forget to mention is that two years after the bill was passed, 21 Republican-led states refused to expand Medicaid. That deliberate sabotage was the major cause of the shortfall.

But arguing over the absolute accuracy of the CBO is arguing over the wrong question. The more important question is whether the CBO projection was more accurate than the predictions of gloom and doom spewed out by the Republicans. Remember all the warnings about “death panels”, and how Obamacare would destroy our economy? Indeed, Donald Trump is now bragging about the economy that Obamacare was supposed to have destroyed. 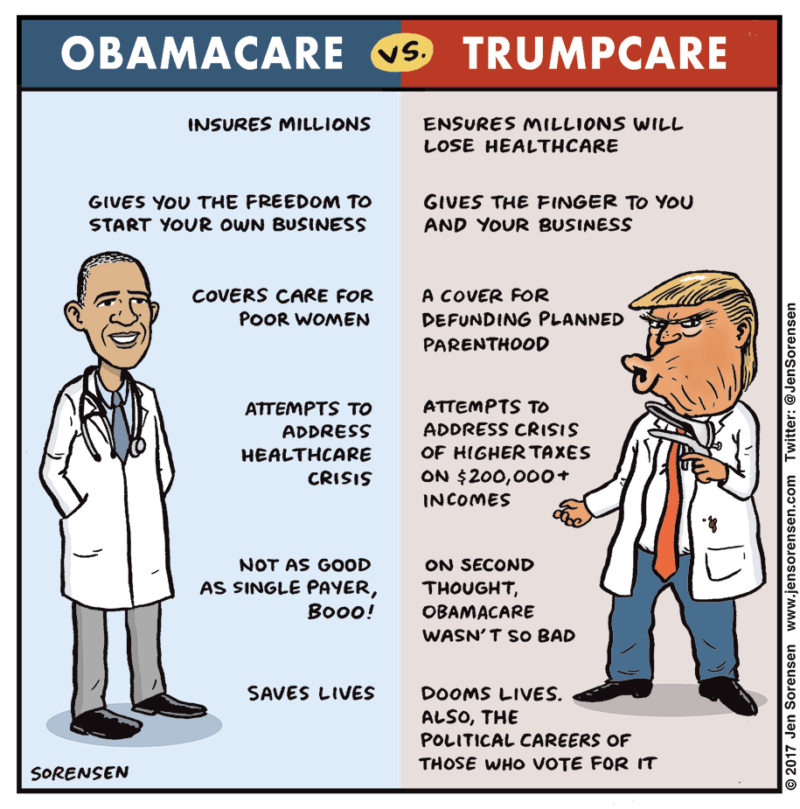 This was written by Iron Knee. Posted on Tuesday, March 14, 2017, at 12:30 am. Filed under Hypocrisy. Tagged Health, Republicans. Bookmark the permalink. Follow comments here with the RSS feed. Both comments and trackbacks are currently closed.