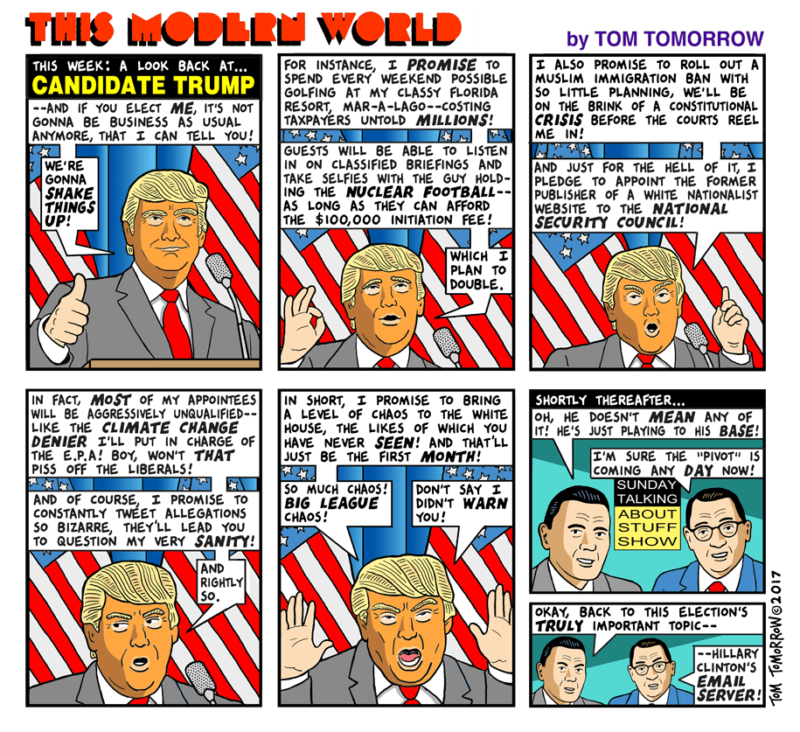 But what is missing from this comic is Trump’s cozying up to the Russians, which the Republican-controlled Congress refuses to investigate. Here’s a timeline presenting Everything We Know About Trumpland’s Ties To Russia. It is so amazingly full of smoking guns, misinformation and lies (including under oath), that Reagan would be spinning in his grave. But of course, Russia was Reagan’s bogeyman, while for Trump it is Muslims and immigrants. Haters gotta hate, and Gorbachev seems like such a pussycat compared to Putin. But Trump’s racism almost makes you nostalgic for Reagan’s red baiting.

Just the connections between former Trump campaign chairman Paul Manafort and Russian intelligence would be worthy of a full Benghazi-style hearing.

But if you read just one article about the evidence connecting Trump with Putin, let it be this one by Nicholas Kristof, who lays out the “dots” and then dares you to either connect them or try to deny that they are not connected. Far too many people in the Trump administration are telling obvious lies about their connections to Russia for this to just be a simple coincidence.

Are Trump’s tweets, constitutional crises, lies, and general chaos just a smokescreen to take our attention away from something far more nefarious? Stay tuned.

This was written by Iron Knee. Posted on Wednesday, March 15, 2017, at 3:05 am. Filed under Hypocrisy. Tagged Lies, Russians, Trump. Bookmark the permalink. Follow comments here with the RSS feed. Both comments and trackbacks are currently closed.