Conservative George Will has a lovely and hilarious opinion piece in the Washington Post. I really do recommend that you go read the whole thing, but I’ll include a few paragraphs to entice you. One warning: you will probably need a dictionary.

Will’s claim is that Donald Trump is actually something that the nation did not know it needed, which is essentially a good kick in the pants so we can wake up and stop giving all the government’s power to the president. Not just Trump, but all presidents. As the saying goes, “absolute power corrupts absolutely”, and so this inexorable transfer of power to the executive branch absolutely has to stop.

To the list of history’s sublime romances — Abelard and Heloise, Romeo and Juliet, Elizabeth Bennet and Mr. Darcy — add the torrid affair between Anthony Scaramucci and President Trump. The former’s sizzling swoon for the latter is the most remarkable public display of hormonal heat since — here a melancholy thought intrudes — Jeff Sessions tumbled into love with Trump. Long ago. Last year.

Fortunately, today’s president is so innocent of information that Congress cannot continue deferring to executive policymaking. And because this president has neither a history of party identification nor an understanding of reciprocal loyalty, congressional Republicans are reacquiring a constitutional — a Madisonian — ethic. It mandates a prickly defense of institutional interests, placing those interests above devotion to parties that allow themselves to be defined episodically by their presidents.

Fastidious people who worry that the president’s West Virginia and Ohio performances — the alpha male as crybaby — diminished the presidency are missing the point, which is: For now, worse is better. Diminution drains this office of the sacerdotal pomposities that have encrusted it. There will be 42 more months of this president’s increasingly hilarious-beyond-satire apotheosis of himself, leavened by his incessant whining about his tribulations (“What dunce saddled me with this silly attorney general who takes my policy expostulations seriously?”). This protracted learning experience, which the public chose to have and which should not be truncated, might whet the public’s appetite for an adult president confident enough to wince at, and disdain, the adoration of his most comically groveling hirelings. 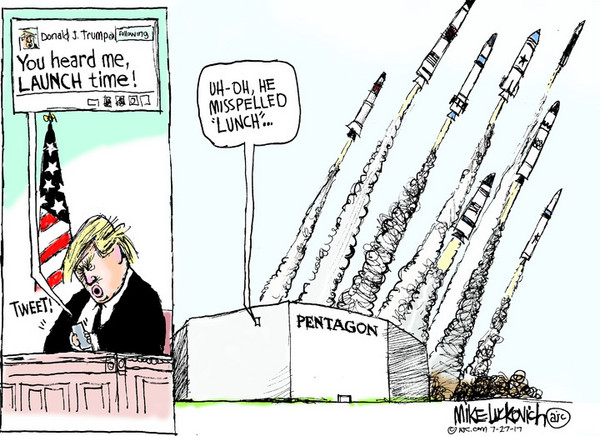 This was written by Iron Knee. Posted on Saturday, July 29, 2017, at 1:37 am. Filed under Humor. Tagged Trump. Bookmark the permalink. Follow comments here with the RSS feed. Both comments and trackbacks are currently closed.