The president is collaborating with the enemy

The Trump administration is not fighting a war against climate change, it is collaborating with the enemy. And it is doing it in the sneakiest way possible. In July, the EPA made it easier to release carbon dioxide pollution from vehicle tailpipes. Then in August, made it easier for coal-fired power plants to release carbon dioxide. And finally, this month, the EPA is planning on making it easier to release methane into the atmosphere.

Methane is one of the most powerful greenhouse gasses, which leaks from oil and gas wells, and is also intentionally vented and “flared” (burned) from drilling operations. Energy companies have often complained that the regulations requiring them to test for methane emissions are costly and burdensome. So the Trump administration will just waive them.

New, more powerful hurricanes are pounding this country, but unlike the entire rest of the world we aren’t fighting, we are rolling over and surrendering to powerful oil and gas interests. 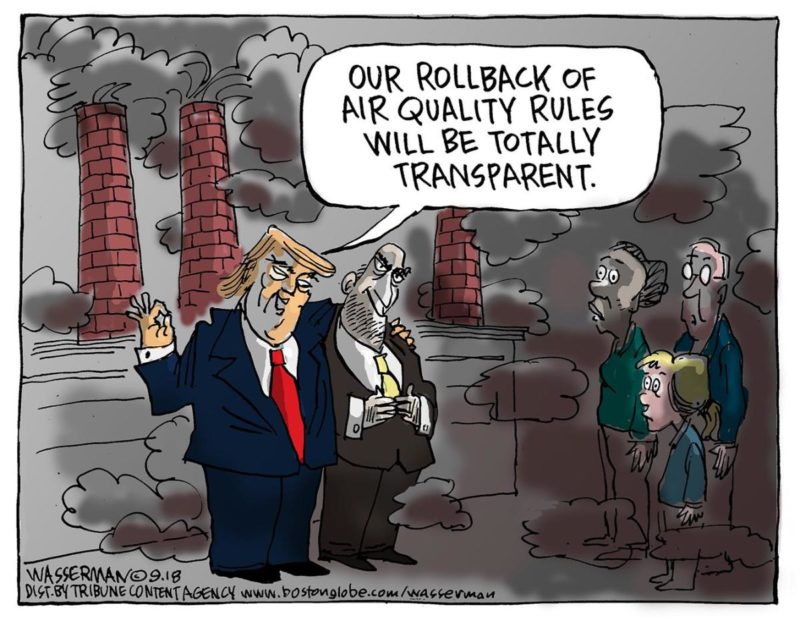 But that is just one example of collaboration. In 2006, Trump stopped borrowing money from banks to finance his projects, and instead suddenly started making all of his investments in cash. That’s $400 million on 14 real estate projects since then, and nobody knows where the money comes from.

Well, maybe we do. Remember when Eric Trump blurted out to a golf magazine that the Trump organization doesn’t rely on American banks because they have all the funding they needed from Russia? Hmmmm.

In the book “Fear” (released today) there are some interesting quotes. Three weeks before the presidential election, Steve Bannon told Kushner that the campaign needed $50 million from Trump. Kushner balked saying “He’ll never do it,” and adding “He doesn’t have a lot of cash.” So Bannon and Kushner told Trump that they needed $25 million. Trump responded “No way. Fuck that. I’m not doing it.”

Remember that Trump promised that he would self-fund his campaign. I guess that was another lie. In the end, Trump made a $10 million loan to his campaign, to be repaid using the small cash donations that were coming in from his supporters.

In addition, the founder of Fusion GPS (who commissioned the famous dossier by Christopher Steele) told Congress that the Trump organization must have some outside funding because “he doesn’t have enough money to do this and that he would have had to have outside financial support for these things.”

So where is this money coming from? The one thing I hope (and expect) the Democrats will do if/when they take over either the House or the Senate is to launch an investigation into Trump’s finances, including getting Trump’s income tax returns. Trump has a bad habit of giving himself away, and he has repeatedly said that investigating his personal finances is off limits. What is he trying to hide? 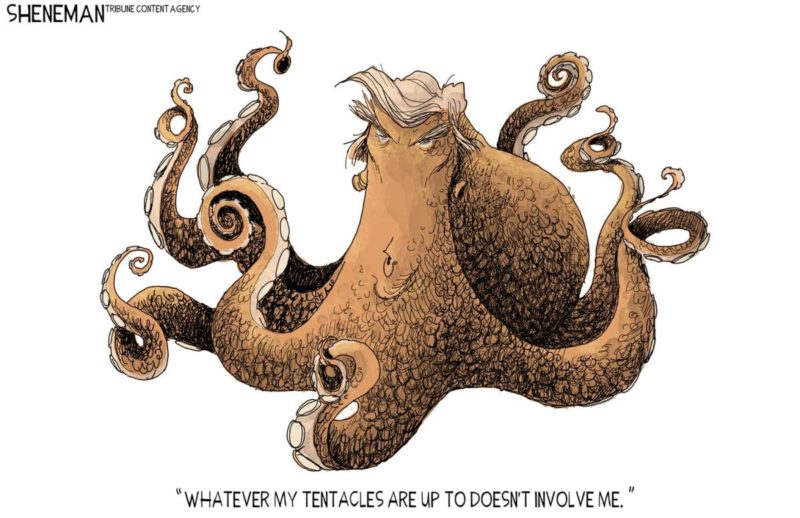 This was written by Iron Knee. Posted on Tuesday, September 11, 2018, at 12:05 pm. Filed under Irony. Tagged Climate Change, Lies, Money, Russia. Bookmark the permalink. Follow comments here with the RSS feed. Both comments and trackbacks are currently closed.