From electoral-vote.com, talking about how Donald Trump seems to be going for a all-time world record in lying:

For the first year of his presidency, he was averaging about five lies a day, and in the second year that slowly crept up to about 7.5 a day. In October, though, his average jumped to a staggering 35.6 lies a day, including one day (October 22, the day of the Ted Cruz rally) where he issued forth with an amazing 83 whoppers. To squeeze that many in, you pretty much have to lie about everything.

And I say, all I’m doing is just telling the truth, what can I say?

Ding, ding, ding! We have a winning liar!

What is even more frightening is that his insults are literally leading to injuries. Again from Electoral Vote:

Of course, the biggest problem is not the lies, per se, but the fact that lots of people take what he is saying as the truth and as a call to action. In the case of Robert Bowers, of Tree of Life Synagogue infamy, it is about 95% certain that he was egged on by the President’s words and actions. In the case of pipe bomber Cesar Sayoc, it is about 99% certain. And on Friday, we got our first 100%. The Nigerian army, among the world’s most cruel and corrupt military forces, opened fire on rock-throwing protesters and killed at least 40 of them. Then, they posted a clip to their official Twitter account of Trump’s Thursday remarks about opening fire on rock on throwers. 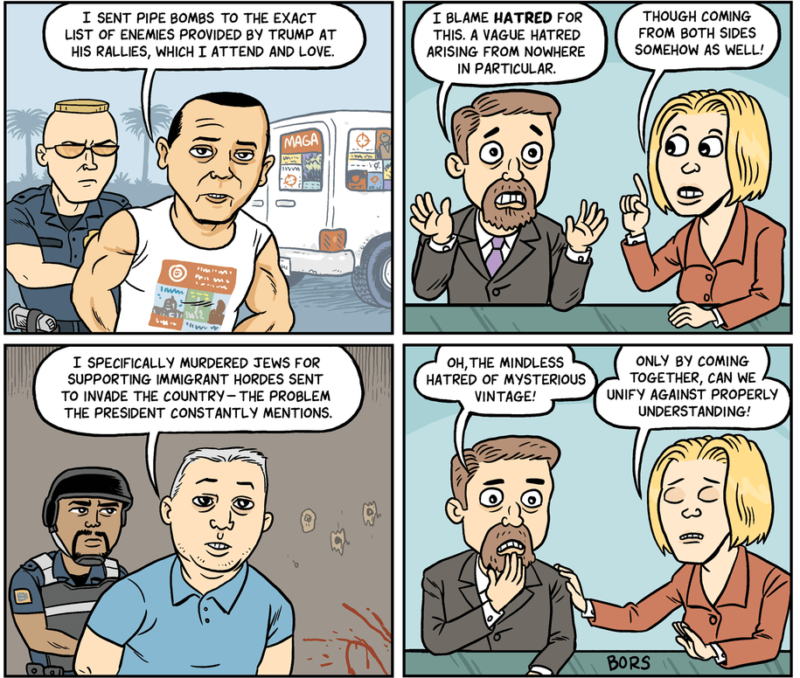 This was written by Iron Knee. Posted on Saturday, November 3, 2018, at 8:36 am. Filed under Hypocrisy. Tagged Donald Trump, Lies. Bookmark the permalink. Follow comments here with the RSS feed. Both comments and trackbacks are currently closed.