Apparently, we can’t just get along 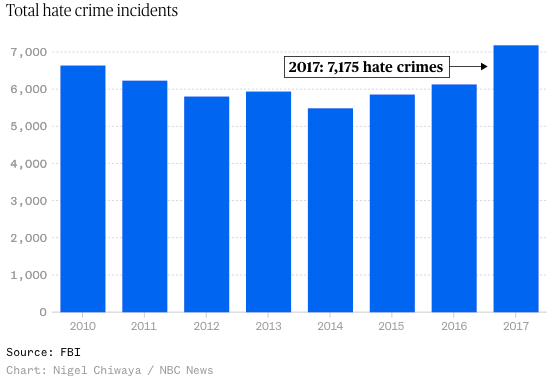 Hate crimes increased by an even larger amount against Jews (37%). And that doesn’t even include the recent event in Pittburgh, where a gunman killed 11 Jews at their synagogue. That was the worst anti-Semitic attack in US history.

Many experts in Civil Rights note that hate crimes are vastly under-reported, because victims choose not to report the crimes, or because some police agencies do not keep statistics on hate crimes. The Arab American Institute estimates that fewer than 5% of hate crimes actually show up in the FBI data. For example, they point out that it is hard to believe that the Las Vegas Police Force, who serve 1.6 million residents, reported zero hate crimes in 2017.

This was written by Iron Knee. Posted on Wednesday, November 14, 2018, at 12:15 am. Filed under Irony. Tagged Hate. Bookmark the permalink. Follow comments here with the RSS feed. Both comments and trackbacks are currently closed.