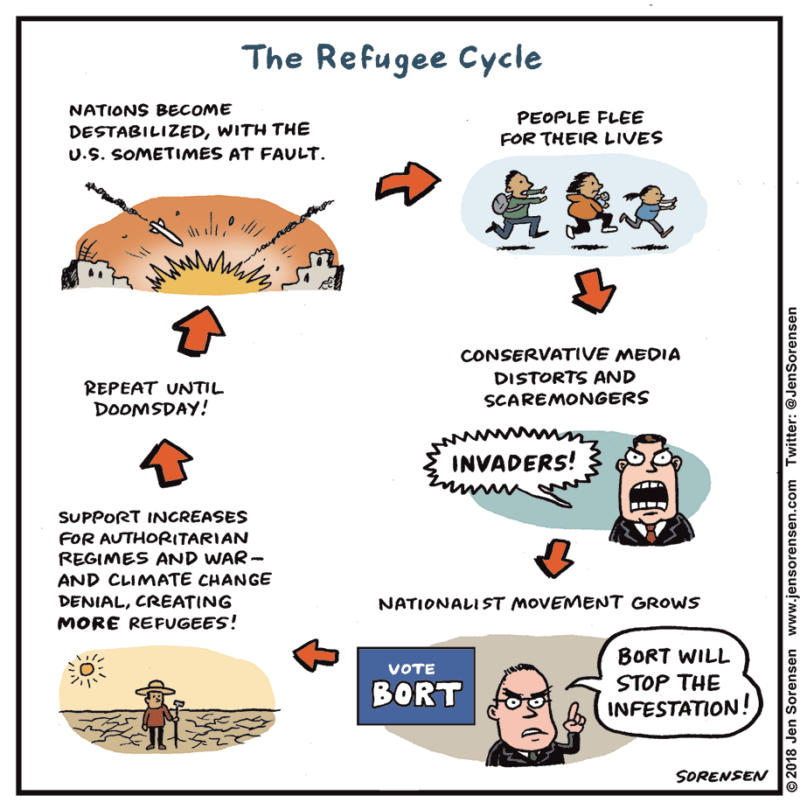 Bad choices often come home to roost, but in this case, it is a vicious cycle where our reaction to a perceived problem just makes the problem worse.

Donald Trump rails against immigrants, both legal and illegal. But think about it a minute. Where are these migrants coming from? Mostly from the Middle East and Central America. Well, remember the Iran-Contra scandal where we sold arms to Iran (which was illegal) and used the profits to fund the Nicaraguan Contras in their fight to overthrow their government (also illegal)? As a side note, do you know who pardoned everyone involved in this sad affair? (Hint: he died recently.)

And then there was our invasion of Iraq in retaliation for 9/11 (which Iraq and Saddam Hussein had nothing to do with). And killing Muammar Al Gathafi. And funding Osama bin Laden in Afghanistan. And our invasion of Panama. And on and on.

So it was our actions that helped fuel the refugee crisis. Which led to politicians like Trump stoking fears about immigrants. But it isn’t limited to the US. The Brexit vote in the UK was driven by fear of immigrants. Nativist and populist politicians are increasing in power in many places around the world.

Another huge ironic aspect of this is the use of fear of disease to attack immigrants. Donald Trump said “Tremendous infectious disease is pouring across the border.”

But a new study published yesterday in the medical journal The Lancet argues that this is completely backwards. “There is no evidence to show that migrants are spreading disease. That is a false argument that is used to keep migrants out.” In general, immigrants are healthier than people in their host countries.

In addition — and this is really ironic — a large percentage of health care workers are immigrants. In the US, 29% of doctors and 24% of dentists were born elsewhere. According to the study, “Rather than being a burden, migrants are more likely to bolster services by providing medical care, teaching children, caring for older people, and supporting understaffed services.”

Even if it were true that migrants were more likely to be diseased, our current actions seem intentionally designed to make the situation worse. The Trump administration is trying to make it more difficult for legal immigrants to get green cards if they have ever used Medicaid. Studies have shown that even legal immigrants are already afraid to sign up for public benefits because they are afraid they will be deported. According to the American Medical Association and the American Hospital Association, this will cost US taxpayers more as immigrants avoid getting health care and end up getting sicker than they otherwise would. If we are really concerned about the bad health of immigrants, wouldn’t it make more sense to make sure they have proper medical care?

Of course, we do have an example of immigrants bringing in “tremendous infectious disease”, but it happened hundreds of years ago. When Europeans “discovered” America, they brought with them smallpox, bubonic plague, chickenpox, cholera, diphtheria, malaria, measles, scarlet fever, tuberculosis, typhoid, typhus, whooping cough, even influenza and the common cold.

In the US, these diseases killed up to half of all Native Americans, and many smaller tribes went extinct. In Florida alone, the population of Native Americans dropped from 700,000 to 2000, a death rate of 99.7%. In Mexico, around 25 million indigenous people died due to introduced disease, which has been described as “the greatest genocide in the history of man.” And despite advances in medicine, we still suffer from most of these diseases.

But even if foreign germs were something to fear today, eliminating immigration entirely now wouldn’t make us any safer at all, because the vast majority of people moving across our borders are not immigrants (they are things like business people and tourists). And it wouldn’t stop diseases that come in other ways, like via rats on cargo ships or birds that easily fly over any wall.

And of course, even if it made any sense to stop immigration, building Trump’s wall wouldn’t stop enough immigrants to make any difference at all. After all, a wall wouldn’t stop immigrants coming in by sea, or who use underground tunnels. And according to people who smuggle in illegal immigrants, there are always border agents or customs officials who are willing to take a bribe and look the other way. And The Wall wouldn’t stop drug smuggling either, as most illegal drugs come in through ports of entry, not where the wall would be built.

If we are really worried about our safety, we would spend the ridiculous amount of money the wall would cost us on providing better health care.

But maybe the politicians who complain about immigration don’t really care if they stop it. After all, if they did that, they wouldn’t have anyone on whom to blame everything, and nobody would vote for them.

If you liked this, you might also like these related posts:
This was written by Iron Knee. Posted on Thursday, December 6, 2018, at 12:56 pm. Filed under Irony. Tagged Disease, Immigrants, War. Bookmark the permalink. Follow comments here with the RSS feed. Both comments and trackbacks are currently closed.