Phil Gramm sucks – everything he touches costs you money

Who is Phil Gramm?  You might have heard his recent statement that America is a “nation of whiners” about the economy. He is a co-chair of McCain’s presidential campaign and arguably his main economic advisor — McCain once called Gramm his “financial guru”. So let’s look at Gramm’s economics:

According to former official of the Commodity Futures Trading Commission and current law professor Michael Greenberger “Gramm has been a central player in two major economic crises — the credit crisis and the incredibly high price of energy.”

So when Gramm tells you to stop whining, it is because you are getting in his way of becoming McCain’s Secretary of the Treasury and costing you even more money. 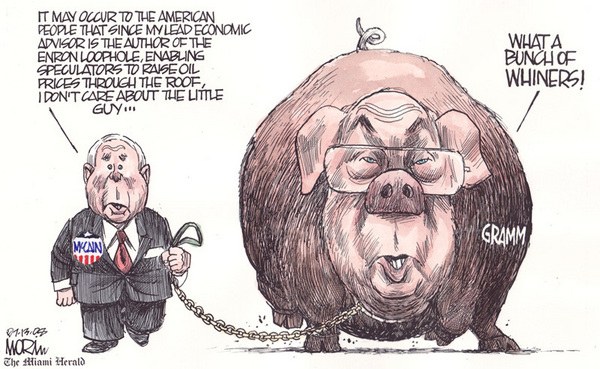 This was written by Iron Knee. Posted on Sunday, July 13, 2008, at 5:31 am. Filed under Hypocrisy, Popular. Tagged McCain. Bookmark the permalink. Follow comments here with the RSS feed. Both comments and trackbacks are currently closed.