Michelle Malkin has been a consistent cheerleader for the McCain/Palin campaign, but it appears that even she has had enough: 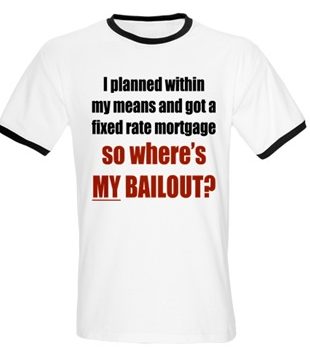 This was his supposed “game-changer.” This was the very first thing out of his mouth during the debate tonight — his big pitch right off the bat.

He spent the entire debate assailing massive government spending — while his featured proposal of the night was to heap on more massive government spending to pursue home ownership/retention at all costs. If Obama had proposed this, the Right would be screaming bloody murder about this socialist grab to have the Treasury Department renegotiate individual home loans and become chief principal write-down agents for the nation.

This was written by Iron Knee. Posted on Thursday, October 9, 2008, at 7:05 am. Filed under Irony. Tagged McCain. Bookmark the permalink. Follow comments here with the RSS feed. Both comments and trackbacks are currently closed.