Rush Limbaugh talking about Obama’s plan to reform health care in the US:

I’ll tell you why Obama wants to hurry. I’ll answer my own question. If he doesn’t get it done now he’s not going to get it done because everything he’s doing is falling apart. Everything he’s doing is crumbling. He’s in a state of panic out there. He wants it done because if he gets this — if he gets health care, folks, as Mona Charen wrote — it’s the ball game. It’s all she wrote. In socialized medicine, government health care — you heard him say, the overweight are to blame. Yeah, folks, I gotta tell you something. 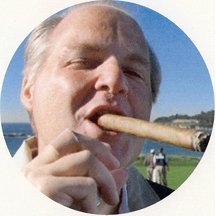 I think those of you that regularly exercise — playing softball, baseball, basketball, soccer, mountain biking, running, rock climbing, skiing, skating, running — you’re the people getting injured. You’re the people showing up at the hospital with busted knees and tendons and skin cancer, ankle sprains, knee and hip replacements, broken bones, concussions, muscle, ligament, tendon, cartilage strains and tears, tendinitis, rotator cuff tears. All you exercise freaks, you’re the ones putting stress on the health care system. What happens when people don’t regularly exercise and keep their weight relatively under control? Nothing! They probably don’t even know their doctors’ names. So you’re urging to go out there do all of this stuff and you’re ending up in the hospital all the time with these injuries and some people think these injuries are badges of honor. A knee surgery scars a badge of honor shows toughness. Yeah. Toughness, somebody else has to pay for.

Hear the audio at MediaMatters.

This was written by Iron Knee. Posted on Saturday, June 13, 2009, at 11:06 am. Filed under Hypocrisy. Tagged Health, Limbaugh. Bookmark the permalink. Follow comments here with the RSS feed. Both comments and trackbacks are currently closed.