Military Betwixt and Between Oil and Clean Energy 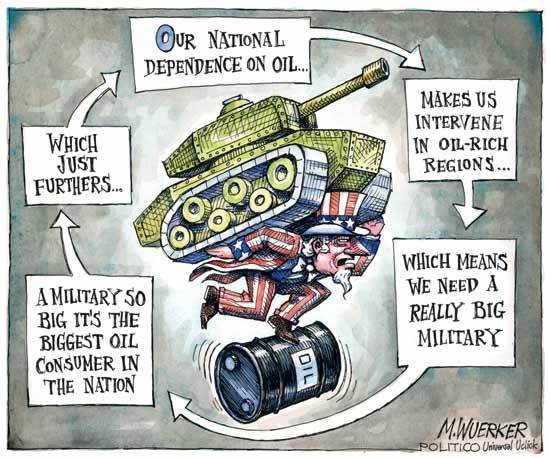 And around and around we go...

Ironically – in a good way – it is the military that is taking serious steps to reduce it’s own reliance on oil. From an article in National Journal:

The Pentagon on Tuesday unveiled its first “Operational Energy Strategy,” a plan to fundamentally transform the way fuel is used in the theater of war.

Clean-energy advocates have heaped praise on the plan, saying it could also drive major energy innovations in the commercial sector.

The strategy is a formal step forward in a broad effort by senior Defense officials to cut the military’s dependence on oil and expand its use of alternative energy, as troops lose their lives protecting fuel convoys trucked through Afghanistan and soaring oil prices drive up the Pentagon’s energy bills. The U.S. military is the single largest industrial consumer of oil in the world. In 2010, it spent $13 billion on fuel; in 2008, when oil prices reached a record of $147 a barrel, the military spent nearly $20 billion.

The forward thinking Rocky Mountain Institute is one organization that believes we can still avoid the worst case climate change scenarios and is working with industry and the military on that goal. Amory Lovins, chairman the Rocky Mountain Institute, advises military officials on the Pentagon’s transformation of its energy strategy which will have profound effects on the nation’s broader energy economy:

Now that the Pentagon is starting to value saved energy, that will drive extraordinary innovation in vehicles, buildings, generators, and onsite renewables. That value is one or two times more valuable than commercial market. Those products and technology will find themselves back into market – it will greatly accelerate the energy revolution.

and To The Military, Renewable Energy is a Matter of National Security.

The Military is serious. Green energy advances it’s mission so ideology is set aside (as much as possible at least). Hopefully this effort will do for alternative energy what NASA did for engineering in the 1970s and early 80s.
– Iron Filing

This was written by Iron Filing. Posted on Thursday, December 1, 2011, at 8:00 am. Filed under Irony. Tagged Green Energy, Military. Bookmark the permalink. Follow comments here with the RSS feed. Both comments and trackbacks are currently closed.