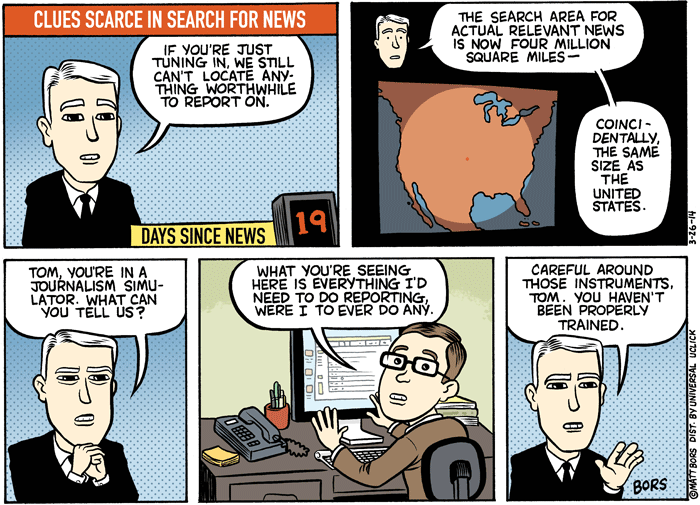 Just in case you don’t get it, this comic is making fun of CNN and their pitiful coverage of the missing flight in SE Asia. Or as New York magazine put it “CNN Gives Up, Wonders About Supernatural Conspiracy Theories for Flight 370 Disappearance“:

There’s only so much “breaking news.” After more than a week of wall-to-wall coverage on the missing Malaysia Airlines Flight 370, much of it baseless speculation from vaguely defined experts, CNN today resorted to the most baseless of speculation from a certifiable non-expert about what “supernatural” or conspiratorial explanations there could be for the disappearance.

It must be tough to be a modern mainstream media journalist. You have to follow a tight script:

And as long as everyone is piling on to CNN, we’ll let Jon Stewart have the hilarious last word:

This was written by Iron Knee. Posted on Wednesday, March 26, 2014, at 12:31 am. Filed under Irony. Tagged Media. Bookmark the permalink. Follow comments here with the RSS feed. Both comments and trackbacks are currently closed.