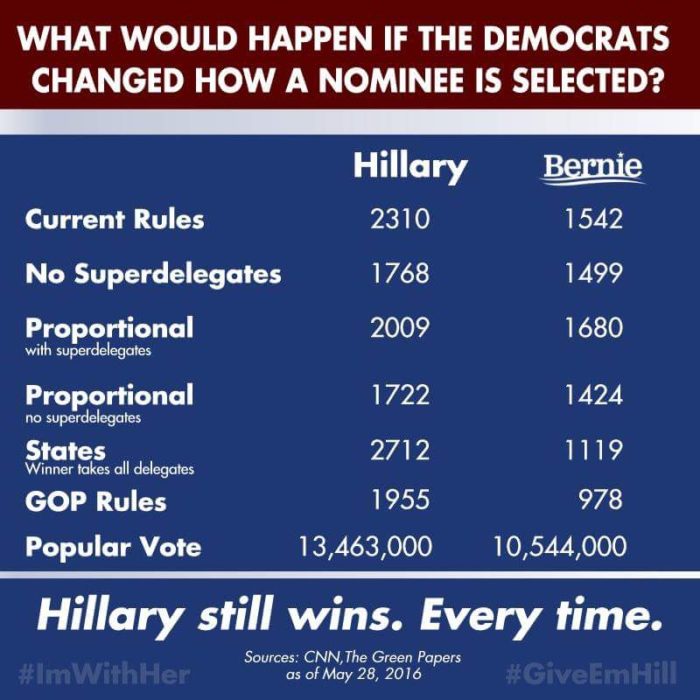 So, do you believe in democracy or not?

The Washington Post couldn’t find any change in the rules that would give Sanders a win. Right now, the only way he could become the nominee is if most of the superdelegates ignore the will of their voters, abandon Clinton and decide to vote for Sanders. Sanders has been touting this argument since March, but so far not a single superdelegate has switched (none have even talked about doing it).

To his credit, Bernie Sanders himself is starting to make some motions of coming around. He is spending more time attacking Trump — even giving Trump the nickname of “Mr. Macho“:

And for those of you who still have an uneasy feeling about Clinton, here are two posts from Facebook. The first is from Gavin Newsom, the current Lieutenant Governor of California and formerly the mayor of San Francisco:

In 2004, after I ordered the city clerk to give same-sex couples marriage licenses, I quickly became a pariah in the Democratic Party. I was accused of endangering Sen. Kerry’s campaign for president, my speech at the national convention was cancelled, and most hurtful, major democratic candidates and elected officials — some of whom were my friends — refused to be photographed with me or even be in the same room with me. I was being demonized by the left and the right. Only one major figure in the Dem party was willing to be photographed with me: Hillary Clinton. In 2004, we did an event together down at Delancey Street in San Francisco. I’ll never forget that moment — that when I was being attacked for my position on same sex marriage and what we did in San Francisco, she was willing to stand with me in public when no one else was. ‪#‎ImWithHer‬

Just who were you expecting? Seriously. When a woman finally captured the nomination of a major party for President, what kind of a woman did you think she would be? Did you think that she might be tough-minded and pragmatic, someone who knows how to work the system and who is willing to do that? Did you think she might be someone flawed, who has made mistakes, but who is also resilient enough to withstand two and a half decades of relentless attacks? Did you think she might be a fighter, carrying the scars of a fighter? And if you thought she would be any of those things, did you really expect that anyone would like her, given what we demand of women in this culture? Let me tell you something: I have not liked this woman, either. I don’t agree with some of the things that she’s done, and some of the things that she stands for now. But I admire her. I am moved by who she is, given what we have put her through. And I am absolutely for her. 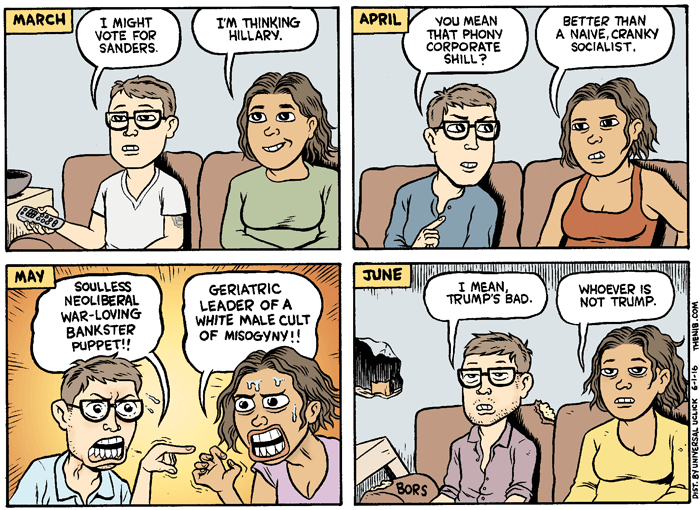 If you liked this, you might also like these related posts:
This was written by Iron Knee. Posted on Thursday, June 2, 2016, at 12:25 am. Filed under Irony. Tagged Hillary Clinton, Trump. Bookmark the permalink. Follow comments here with the RSS feed. Both comments and trackbacks are currently closed.